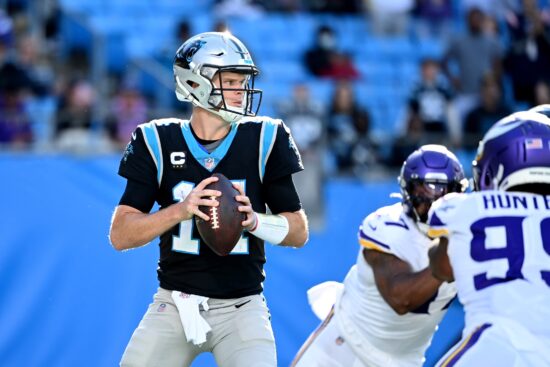 Both teams have some serious problems with injuries, especially in the offense. Arguably the best running back in the NFC, Carolina’s Christian McCaffrey remains on the injured reserve list with a hamstring injury. The Panthers’ superstar will miss his fourth straight game in the 2021 season – his team lost each of the previous three.

Will we see the Panthers losing again? Probably not. Luckily for them, they’re squaring off with one of the NFL’s worst teams, the New York Giants. This team too has plenty of injured players, which explains why the odds are so much in favor of the visitors.

In McCaffrey’s Absence, It’s All About Darnold in Carolina

The Panthers’ coach Matt Rhule is adamant that his team should stick to the running game even with no Christian McCaffrey around. At least that’s what he told in the press conference following his team’s Week 6 overtime loss to the Minnesota Vikings.

Still, there’s a big question mark hovering about the Panthers’ RB backups and their ability to fill in McCaffrey’s shoes. For this reason, we might see Rhule adjusting his game plan and focusing more on the passing game. At least, that could be the case in Week 7 against the Giants.

The Panthers have plenty of talent on the receiving end, but the trouble is that their quarterback isn’t having the best season of his life. Actually, it’s far from it.

On the bright side, he did make a couple of important passes in key moments of the game. This includes the one in the final minute of the regulation, which helped his team take the game to overtime.

There’s a glimmer of hope that Darnold could improve. It’s not only because of what we saw in the thriller with Minnesota; it’s also because he’ll be playing against one of the NFL’s worst defenses in Week 7.

Everything seems to Be Going Wrong for the Giants

There’s only one team in the division that’s conceded more points than the Giants this season. Their total is 177, but what’s worrying is that 102 of those points happened in the past two weeks.

To be fair to them, the Giants did play against two very high-scoring teams – the Dallas Cowboys and the Los Angeles Rams.

That said, their defense might not be as bad as it appears at first. In fact, it’s their offense that’s responsible for their poor results.

The reason behind that is that some of their key offensive players have been struggling with injuries. Running back Saquon Barkley and wide receiver Kenny Golladay missed the Rams game and will probably stay off the field in Week 7.

As if that wasn’t enough, another two offensive players picked up injuries last weekend. The guys in question are offensive tackle Andrew Thomas and wide receiver Kadarius Toney.

This is a chance the Carolina Panthers mustn’t miss – they need to beat the undermanned New York Giants on Sunday.

Even though they’ve been far from impressive in the past three weeks, the Panthers still do have the quality needed to beat the Giants, covering the 3-point spread along the way.