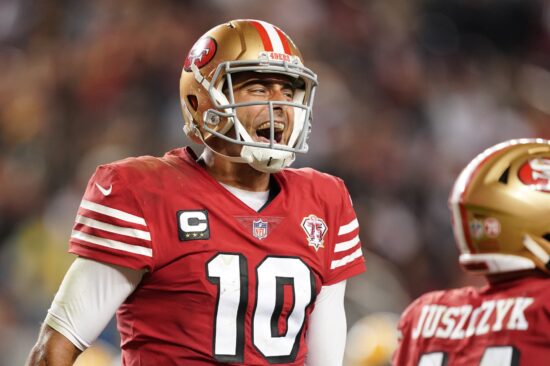 This is one of the NFL’s classics, as two franchises with great history meet one another in the playoffs. We don’t need to tell you too much about the Cowboys and the 49ers’ impact on American football. Just look at all the Super Bowl trophies they have, and everything will be clear.

Everything is Superb… Apart From Garoppolo

Jimmy G played a crucial role in the clutch moment against the Rams, which saw his team posting a 27-24 win over the NFC West rivals, but he is still the weakest link in the entire 49ers team. He had two picks, and throughout the year, there weren’t too many games in which he didn’t give the ball at least once.

But on the other side, hybrid WR/RB Deebo Samuel is unstoppable, which can be also said for Elijah Mitchell, the rookie rusher who missed six games this year and still totaled 963 yards. These two guys are probably in the best shape of all the players in their position. Hell, Samuel even started throwing touchdown passes.

Also, we need to mention that the defense had been an integral factor in the 49ers’ 8-2 finish. After opening the season very badly, Kyle Shanahan found a formula that propelled his boys to the playoffs.

Expensive Stars to Prove Themselves

Jerry Jones had to make quite the financial gymnastics to fulfill all the needs of his superstars. For the moment, that money spent is returning well, but we are pretty sure that Jones, as well as the players, won’t be satisfied with only a playoff appearance.

The Cowboys are after the Super Bowl title, and their main weapon is the offense. Dak Prescott did slow down in the second part of the season, but that is where Tony Pollard jumps in, with the second-string RB posting his first 1,000+yards scrimmage campaign.

Trevon Diggs and the defense had the most takeaways this year, but we need to remind you that Diggs is one of the few players who allowed 1,000+passing yards on his coverage.

This might be a shock for some, but we predict San Francisco’s win here. Even though Garoppolo has massive oscillations, we think the 49ers have better chances to win, solely due to a ground game. Also, we doubt that the Cowboys will be pressuring Jimmy G often and force him to make some cardinal mistakes, which can’t be said for the 49ers pass-rush, that plays just fine for the moment. This is the one where we predict an upset.