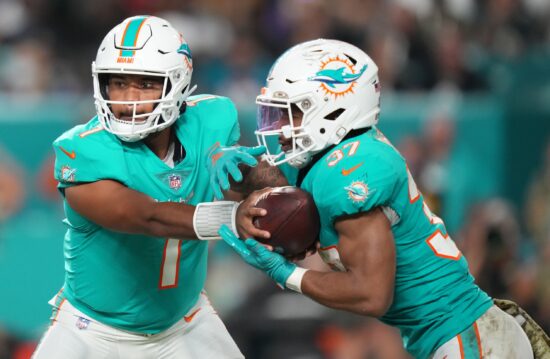 If you’re looking for some NFL predictions – look no further because Vegas Odds has you covered!

Even though we have published a comprehensive preview from all of Week 1’s matchups, in this article, we are going to focus on the Patriots’ traveling to take on the Dolphins.

Even with Tom Brady in the Pats, the franchise from Foxborough had problems with the Dolphins. The legendary NFL QB is out of town for a while now, and the situation is the same, with the Fins sweeping New England in the seasonal series last year.

Rough Start for the Pats

The Pats reached the playoffs last year, but are now in danger of opening the season with 0-4. After Miami, they head to Pittsburgh, come back home to meet the Ravens, and then head for Green Bay. It couldn’t be a worse start for Bill Belichick and his unit.

Mac Jones is in the middle of attention. The youngster didn’t get some sounding receivers, but that is maybe good, as some claim that Belichick wants him to develop targets, not the other way around. For the moment, DeVante Parker, Kendrick Bourne, and Jakobi Meyers are starters in those positions. Tight-end duo is one of the most promising in the league, Hunter Henry and Jonnu Smith, but that is nothing new with Belichick.

The defense is solid as usual, but there were some critics on Belichick’s behalf due to inactivity on the free agency market. We’ll just have to wait and then see whether they were in place.

Tua got two massive additions on the offensive side. The first is Tyreek Hill, and the second is Raheem Mostert. Cheetah will for sure change the entire system in the attack and allow Tagovailoa to have much more options than in the past. Simply, with Hill on the field, everything is different.

Mostert is the kind of guy who can single-handedly break your defensive line into pieces, and with Chase Edmonds as a partner in the backfield, the Fins have a mighty running duo. Don’t forget that this unit already had Jaylen Waddle as one of the best receivers in the league, so we can say that the Fins look superb on the offensive side of the ball.

As for the defense, we won’t bother you that much. It was what kept the Dolphins last season until Tua woke up. It is among the best in the AFC, with a fantastic secondary led by CBs ByronJones and Xavien Howard.

The Fins are favorites, which is completely fine with us. They have a much better team when looking at the roster, and we believe that the high-octane offense will be the key to breaking the Patriots. Hill and Waddle will be too much for the Pats’ secondary, and even if New England stops Edmonds and Moster, the hosts will make a difference on the other side.

Also, Waddle will have more space with Hill involved, which is why we bet the sophomore catches at least one TD in this one.