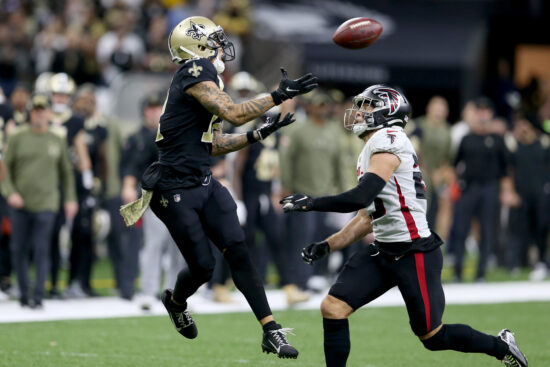 If you’re looking for the best NFL predictions for the Saints vs Falcons – look no further! – Vegas Odds has you covered.

After losing long-time starting quarterback Drew Brees to retirement, last season saw the Saints miss the playoffs for the first time since the 2016-17 season.

After 14 seasons as the Falcons starter, Matt Ryan departed for the Indianapolis Colts this offseason. Expected to start in his place is veteran quarterback Marcus Mariota. If Mariota underperforms, rookie 3rd-round pick out of Cincinnati, Desmond Ridder could fight for the starting role. The Falcons have been stuck in limbo for a while, struggling to make a return to the playoffs. Losing Julio Jones, Calvin Ridley, and Matt Ryan over the last few seasons has made things even more difficult for Atlanta.

Fortunately, the Falcons seem to have a superstar in tight end Kyle Pitts, who was the 4th overall selection in the 2021 NFL Draft. Pitts finished his rookie year with 68 catches for 1,026 yards, but just one touchdown.

As the main target this season, Pitts is expected to lead the way on offense for the Falcons. With an otherwise depleted and rebuilding roster, Falcons fans will focus on Pitts and 2022 1st round pick, wide receiver Drake London, as the positives for the team this season.

After missing the playoffs for the first time in 5 years, the Saints will be looking for a bounce-back year. The retirement of long-time quarterback Drew Brees made things difficult for New Orleans last season. After an oft-injured Jameis Winston traded starts with tight end Tayson Hill at quarterback, the Saints were unable to crack the NFC playoff field. This season, Winston starts out healthy, and star wide receiver Michael Thomas is expected to be back from an injury that cost him most of the past two seasons.

With some key pieces returning to the offense, the Saints also added wide receiver Chris Olave with the 11th overall pick in the 2022 NFL Draft. On the defensive side, the Saints have remained dominant. A defensive line led by Cameron Jordan, who finished with 12.5 sacks last season, ranks among the league’s best. The Saints’ defense will be under much pressure to bail out the offense again this season, but it shouldn’t be too tricky against a rebuilding team like the Falcons.

The Saints are 6-2 against the Falcons over the last four seasons. Both teams have moved on from their long-time starting quarterbacks, but New Orleans has the advantage because of their strong defense. This should be a pretty close and low-scoring game, but I see the Saints getting the job done on the road when everything is said and done.

Fantasy Football Freebie: Kyle Pitts may have gotten a downgrade at the quarterback position this year that could affect his production, but Marcus Mariota is still no slouch. As the top target on the Falcons offense and an athletic freak, expect Pitts to be targeted by the Falcons often and early. He’ll start the season with a bang.