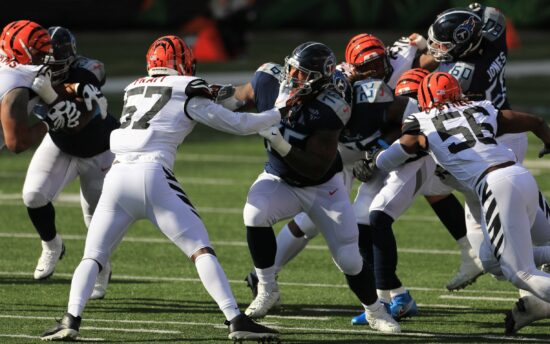 If you’re looking for the best NFL predictions for the Bengals vs Titans game – look no further! – Vegas Odds has you covered.

This Week 12 game features a matchup between the 6-4 Bengals and the 7-3 Titans.

The Bengals got revenge against the Steelers for Week 1 on Sunday, winning 37-30, and splitting the season series. Cincinnati is now 4-1 in their last 5 games, with only a surprising Monday night blowout against the Browns tarnishing that record. They’ve been playing quite well, considering the lack of star WR Ja’Marr Chase, who has missed the last 3 games due to a hip injury. Chase is nearing a return, and may be available for this week’s game against the Titans. His availability is absolutely crucial for the Bengals’ success.

Cincinnati’s schedule is brutal for the remainder of the season. They play the 7-3 Titans, followed by the 8-2 Chiefs next week. After that, they have the Browns, who already blew them out, but with Deshaun Watson at QB. Then, they have Tom Brady and the Bucs.

Following a road game in Tampa Bay, they head up the coast to play Brady’s former team, the 6-4 Patriots. Finally, Cincinnati finishes the season with the 7-3 Bills and 7-3 Ravens. If they win enough games to make the postseason, they’ll certainly have deserved it.

Titans Closing in on Division Title

The Titans got yet another win on Thursday, now 7-1 in their last 8 games. They defeated the Packers 27-17, improving to 7-3 on the season. A loss by the Colts increased Tennessee’s lead over the AFC South division to 3 games. They now have a 97% chance to win the division, which would be their 3rd straight division title. Unfortunately, the Titans lost their first game in each of those playoff appearances. In 2020, they lost to the Ravens. Last season, they were defeated by the Bengals. This could be their revenge game.

Tennessee’s team this year is similar to previous seasons’ playoff teams. A subpar passing game is elevated by Derrick Henry, and a stringent defense closes it out. This has worked in the regular season, but it hasn’t been enough for in the postseason, and the loss of WR A.J. Brown over the made things even more difficult this year. The key is Ryan Tannehill, who Tennessee has now won 6 straight games with. He went 22 for 27 for 333 yards, 2 TDs, and 1 INT in the win on Sunday, and will need to be equally sharp this week.

In last season’s AFC Divisional round, we saw this same matchup, with the Bengals traveling to Tennessee to take on the Titans. They’ll get a rematch of that this week, with the Titans hoping to change the outcome this time around. Unfortunately, the Bengals have the more talented roster, which should give them the advantage. Cincinnati needs to focus on throwing everything they have at Derrick Henry. If they can do that successfully, they should emerge victorious, especially if Ja’Marr Chase makes his return this week.