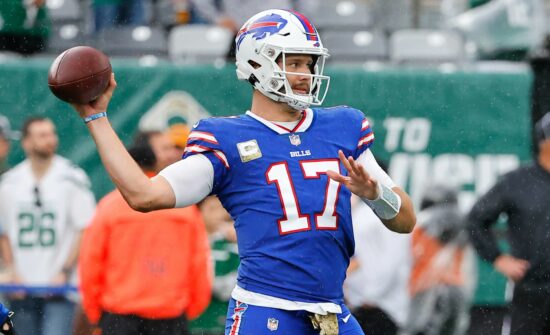 If you’re looking for the best NFL predictions for the Bills vs Lions game – look no further! – Vegas Odds has you covered.

This Week 12 game features a matchup between the 7-3 Bills and the 4-6 Lions.

The Bills improved to 7-3 with a win over the Browns on Sunday, regaining a tie for the lead in the AFC East division with the Dolphins. Buffalo entered the season as Super Bowl favorites, but have stumbled a bit as of late. Only one game separates first and last place in the AFC East, so they have no choice but to keep winning to stay alive. QB Josh Allen had another modest performance, as he continued to play through a UCL injury. He finished the day 18 for 27 for 197 yards and 1 TD, equivalent to a 100.4 passer rating.

Despite being out-gained in yardage by the Browns, Buffalo was able to win thanks to some major defensive stands. A forced fumble in Bills territory helped them early on. Afterwards, a turnover on downs, and blocked field goal, kept even more points off the board.

Buffalo will continue to rely on their defense, as Josh Allen works through his injury and getting back to 100%. They’ll have a tough test this week, against a Lions team that has been red-hot. The Bills need to shut down Detroit’s dual-headed rushing attack to win.

Lions Starting to Heat Up

The Lions got their 3rd consecutive win on Sunday, defeating the Giants, 31-18. Detroit now sits at 4-6, and is all of a sudden alive again in a weak NFC wildcard race. Detroit may not have traded away TE T.J. Hockenson, if they had able to foresee this recent stretch of resurgent play. In Hockenson’s absence, 2nd-year WR Amon-Ra St. Brown led the way on offense, reeling in 7 catches for 76 yards. Detroit relied on their run game heavily as per usual, picking up 4 rushing touchdowns in the win, 3 by RB Jamaal Williams.

Meanwhile, the Lions defense has been the most important aspect to their winning streak and resurgent play. 2022 2nd-overall pick Aiden Hutchinson continues to show why he got drafted so high, forcing a key fumble and making several other big plays in the win. Detroit still gives up more points per game than any other team, but they’ve been turning things around as of late. This week’s matchup against the Bills will provide the perfect test to see just how proficient the Lions can be on both offense and defense.

Three weeks ago, the Bills would have been 21 point favorites in this game, with everyone picking them to win. Things are less simple now, with Josh Allen banged up, and Buffalo stumbling a bit lately. Meanwhile, the Lions are finally putting together a winning streak, and are looking for the Bills to be their next victim. Ultimately, I think the difference in level between the two defenses will be key. In crunch time, I like Josh Allen against Detroit’s defense more than Jared Goff against Buffalo’s. I’ll take the Bills to win, but not by a lot.