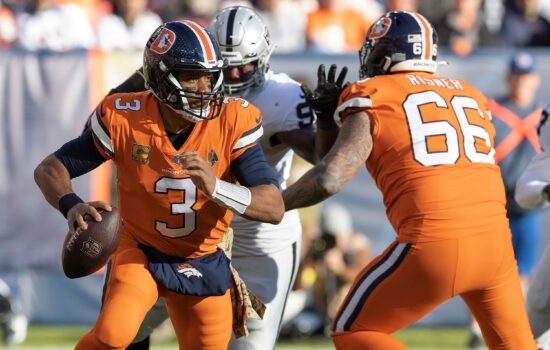 If you’re looking for the best NFL predictions for the Broncos vs Panthers game – look no further! – Vegas Odds has you covered.

This Week 12 game features a matchup between the 3-7 Broncos and the 3-8 Panthers.

Broncos Season is Over

The Broncos lost yet again on Sunday, this time losing by a score of 22-16, at home, against the 2-7 Raiders. This was a must-win game for Denver to retain any hope of salvaging their season. Usually for a team losing this consistently, the silver lining is receiving a prime draft pick. Unfortunately for the Broncos, they traded away their 1st-round pick for QB Russell Wilson, who has produced at an underwhelming level considering the bevy of trade assets used to acquire him. Denver keeps losing, and gains nothing from doing so.

This trade may have set Denver back quite a bit, as their currently projected 5th-overall pick goes to Seattle. Wilson played one of his better games in the loss, finishing 24 for 31 for 247 yards. Their red zone offense and running game also had some major issues.

While their offense continues to struggle, the defense has also regressed. They were unable to stop the Raiders went it counted, surrendering an OT touchdown that sealed the game. The Broncos would likely have to win out to make the postseason at this rate.

The Panthers lost 13-3 against the Ravens on Sunday, falling to 3-8 on the season, and 0-5 on the road. They’ll have an opportunity to bounce back against the struggling Broncos this week, and improve on their home record of 3-3. In Sunday’s loss, QB Baker Mayfield went 21 for 33 for 196 yards and 2 INTs, continuing to play awful football. With P.J. Walker still injured, Carolina is making another change at quarterback. Sam Darnold will get the start this week against the Broncos. He was inconsistent as a starter last season.

Carolina’s defense is their real key to winning. None of their QBs are consistent enough to blow out another team on offense, but average play from Walker or Darnold could be enough to support their stringent defense. On Sunday, they held the Ravens to just 3 points in the first 3 quarters of the game. LB Frankie Luvu continues to be phenomenal. He finished with 10 tackles and a sack against Baltimore. Meanwhile, on offense, 2nd-year WR Terrace Marshall Jr. had a breakout game, catching 3 passes for 76 yards.

The Panthers have only beaten Denver once in their franchise history, back in 2008. This could be the year where they end that drought. Carolina’s defense has been their greatest asset, and the Broncos anemic offense is the type of unit that they are perfectly matched up to overcome. The Panthers are 3-3 at home, and have played well in their own house all season long. I’ll take the upset for Carolina here, and for the Broncos rock-bottom to keep sinking.