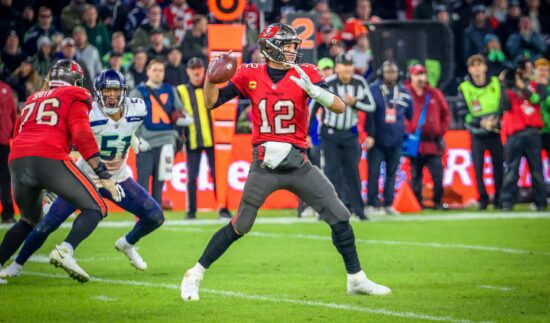 If you’re looking for the best NFL predictions for the Buccaneers vs Browns game – look no further! – Vegas Odds has you covered.

This Week 12 game features a matchup between the 5-5 Buccaneers and the 3-7 Browns.

The Buccaneers had a bye last week, remaining 5-5 on the season. They currently hold a half-game lead over the Falcons in the NFC South division. Wins by the Falcons and Saints during their bye week increased the pressure on Tampa Bay to continue winning. Their offense has struggled all season long, with flashes of both awful and impressive play. 45-year-old QB Tom Brady ranks 15th in the NFL in QBR. His play, much like the Buccaneers, has been neither terrible nor amazing this year. They are exactly average at 5-5.

Where Tampa Bay can rise above the level of mediocrity is their defense. Unfortunately, up and down play has given their defense mediocre numbers as well. They started the season strong, regressed for a bit, and then got back on track against the Seahawks.

All of this has resulted in the Buccaneers ranking 6th in the NFL in scoring defense, allowing 18 points per game. They’ve been much more consistent as of late. If they can keep up the strong defensive play, a division title is very reasonable for Tampa Bay this season.

The Browns lost to the Bills on Sunday, dropping to 3-7 on the year. They played a pretty solid game, out-gaining the Bills in yardage, and committing fewer penalties. Unfortunately, three unproductive trips in Buffalo’s territory cost them the game. A fumble, a turnover on downs, and a blocked FG took at least 9 points off the board in an 8-point game. QB Jacoby Brissett played really well, proving their problems going beyond the QB position. He finished the day 28 for 41 for 324 yards and 3 TDs, good for a 116.3 passer rating.

Despite Brissett playing extremely well, the Browns were still unable to get the win. The Bills are one of the toughest opponents they could have, but it still raises concerns about the team’s viability following Watson’s return after this week. They traded quite a bit to acquire him, but now have holes all over the rest of their roster. The defense has been especially disappointing, allowing about 27 points per game, good for 2nd worst in the league. Cleveland’s season is likely over, and their future is now concerning as well.

This game features an unpredictable matchup between two teams trying to stay afloat. Tom Brady has historically great numbers following the bye, and Tampa Bay’s veteran roster is likely to have benefitted significantly from the week of rest. While I expect this game to be close, I don’t believe the Browns will be able to avoid falling to 3-8 with a home loss here. Watch for RB Nick Chubb to potentially open things up, but otherwise, I’d take the Buccaneers to come away with the road victory in this one.