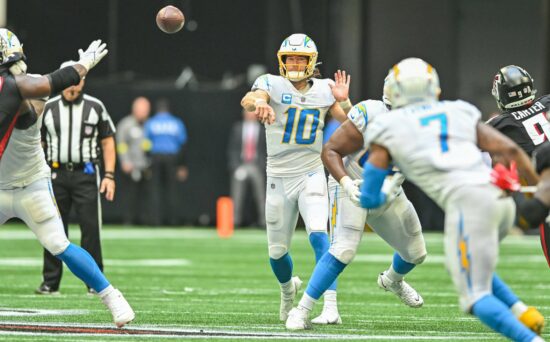 If you’re looking for the best NFL predictions for the Chargers vs Cardinals game – look no further! – Vegas Odds has you covered.

This Week 12 game features a matchup between the 5-5 Chargers and the 4-7 Cardinals.

The Chargers were unable to come away with a win last Sunday against the Chiefs, losing 30-27, and dropping to 5-5 on the season. It was the second time this year that Los Angeles lost to their rivals by just 3 points. Their inability to come away with the win at home has put them in a tough position. They currently sit in 9th place in the AFC, 2 spots out of a Wild Card position. QB Justin Herbert played well, despite the loss, completing 23 of 30 passes for 280 yards, 2 TDs, and an INT, good for a 113.2 passer rating on the day.

2021 3rd-round pick Joshua Palmer had a breakout game on Sunday, catching 8 passes for 106 yards and 2 TDs. Palmer benefitted from the return of fellow receiver Keenan Allen, who drew attention from defenders, while catching 5 balls for 94 yards of his own.

While the Chargers offense played well on Sunday, their defense was unable to stop the Chiefs offensive gauntlet. They were very vulnerable against TE Travis Kelce, who dominated them, especially down the stretch. They’ll need to bounce back against Arizona.

Cardinals on the Fringe of Elimination

The Cardinals were embarrassed by the 49ers on Sunday, losing 38-10 at home, and dropping to 4-7 on the season. The blowout loss reduced Arizona’s already dwindling playoff hopes to just 4%. Backup QB Colt McCoy struggled against San Francisco’s stringent defense. He finished the day 24 for 34 for 218 yards and an INT, posting a 75.4 passer rating. Fortunately, the Cardinals expect QB Kyler Murray to return to the starting lineup this week. A fully healthy Murray, Conner, and Brown could keep Arizona alive a bit longer.

While the Cardinals offense is about to be the healthiest it’s been in several weeks, they’re still without TE Zach Ertz, and are waiting for Marquise Brown to make his official return. Meanwhile, the defense also needs to make some significant improvements to have any shot of staying alive. They allowed the 49ers to score often and easily, allowing an inconsistent opposing QB in Jimmy Garoppolo to post a 131.9 passer rating on the day. A loss this week against the Chargers would be the final nail in Arizona’s postseason coffin.

Both of these teams have talented rosters that are underperforming. Because of that, they are both desperately in need of a win to salvage their season. Arizona’s season may already be finished, giving the Chargers more of a reason to win. Even so, expect this game to be hard-fought and very close. Ultimately, I believe the Chargers will get the win on the road to improve to 6-5. They are overdue for a win, and match up well with Arizona’s struggling defense. I’ll take Los Angeles to win and cover the spread this week.