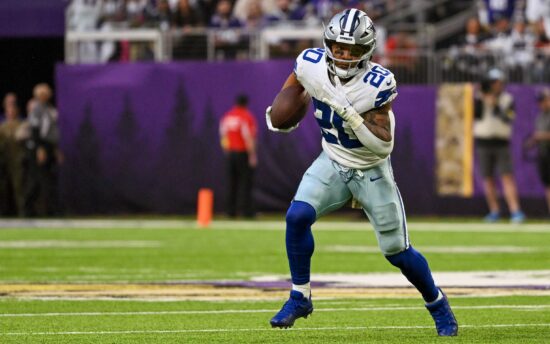 If you’re looking for the best NFL predictions for the Giants vs Cowboys game – look no further! – Vegas Odds has you covered.

This Week 12 game features a divisional matchup between the 7-3 Giants and the 7-3 Cowboys.

Giants Could be in Danger

The Giants lost at home against the Lions on Sunday, falling to 7-3 on the year. The loss exposed some major concerns for New York, primarily, that they had accumulated too many injuries to overcome. The offensive line continues to field mostly backups, aside from superstar LT Andrew Thomas. The receiving corps had one real weapon remaining, rookie Wan’Dale Robinson, who had 9 catches for 100 yards against Detroit, before suffering a season-ending ACL injury. The absence of TE Daniel Bellinger has also been impactful.

New York is dealing with significant injuries on defense. Last year’s sack-leader, Azeez Ojulari, remains on IR. Defensive captain Xavier McKinney injured himself on an ATV during the bye week, and star CB Adoree Jackson was injured returning a punt this week.

The Giants are relying entirely on Daniel Jones, Saquon Barkley, Andrew Thomas, and Dexter Lawrence. While those four are playing quite well, they were not nearly enough to beat Detroit. It could get even worse against Dallas, with any more injuries being fatal.

The Cowboys traveled to Minnesota to take on the 8-1 Vikings on Sunday. They walked away with perhaps the single-best win by any team this season. Dallas dominated Minnesota in every aspect. Despite a blowout score of 40-3, the Vikings only turned the ball over one time. The Cowboys racked up that lead through sheer domination. They accumulated a total of 458 yards, while allowing Minnesota to total just 183 yards of their own. They scored on each of their first 7 drives, and forced the Vikings to punt 7 total times.

QB Dak Prescott was nearly perfect in the win on Sunday, finishing the day 22 for 25, for 276 yards and 2 TDs. He posted a 139.3 passer rating, raising his number on the season to 96.2, following a tumultuous start earlier in the year. RB Tony Pollard continued to thrive, even with the return of starting RB Ezekiel Elliot. Pollard and Elliot both rushed the ball 15 times. Elliot picked up 42 yards on those carries, while Pollard picked up 80. Pollard was also involved in the passing game, hauling in 6 passes for 109 yards and 2 TDs.

Unless this winds up being a total course correction game for both teams, where all of the aspects of last week are negated by this week, it’s hard to imagine a scenario where the Giants would win. They lost to the Cowboys earlier in the season, at home. Dallas also had backup QB Cooper Rush starting for that game, and the Giants had a significantly more healthy roster. The matchup this time around is worse for the Giants in every way. It’s likely they lose this game, and I wouldn’t be surprised if it gets ugly towards the end.