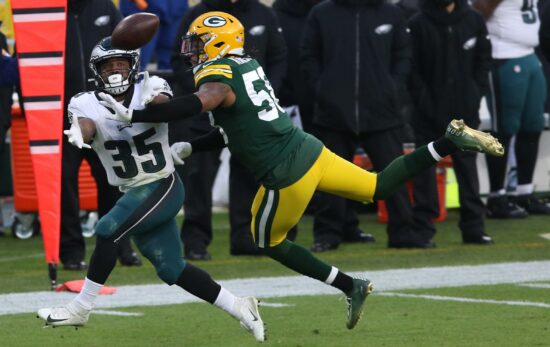 If you’re looking for the best NFL predictions for the Packers vs Eagles game – look no further! – Vegas Odds has you covered.

This Week 12 game features a matchup between the 4-7 Packers and the 9-1 Eagles.

The Packers lost to the Titans last Thursday, falling to 4-7 on the season. Green Bay’s chances of reaching the postseason have dropped to just 6%. Their losses against the Commanders and Giants, who sit above them in the Wild Card race, will likely prove to be costly. QB Aaron Rodgers played pretty well, despite the loss, going 24 for 39 for 227 yards and 2 TDs. Rodgers has had a rough year, currently ranking in the bottom 5 of the NFL in QBR. He’ll have another tough NFC East matchup this week on the road in Philadelphia.

Green Bay’s defense was inefficient in the loss against the Titans. While they managed to hold RB Derrick Henry to just 3.1 ypc, with a 9-yard rush being his longest of the game, they wound up being exposed in the passing game, allowing Tannehill to cut them apart.

The Packers will need a complete turnaround on all fronts, in order to have any chance of salvaging this season. With the NFC wild card teams losing often, they aren’t fully out of it, but each additional loss takes them one step closer to mathematical elimination.

The Eagles snuck past the Colts, 17-16, on Sunday night. They trailed Indianapolis by a score of 13-3, entering the 4th quarter, before finally producing some offense near the end of the game. After being outscored 38-10 in 6 of their last 7 quarters of play, some real concerns have begun to arise in Philadelphia. They started the season with 8 straight wins, but may have fallen asleep at the wheel, and need to get back on track asap. This game against the struggling Packers is a great opportunity for the Eagles to do just that.

Despite their recent struggles, Philadelphia still holds greater than a 99% chance of making the playoffs. On the other hand, their chances of winning the NFC East division have fallen to just 64%, with the Cowboys crawling to within just 1.5 games of the Eagles. In Sunday’s win, QB Jalen Hurts had another good game, going 18 for 25 for 190 yards and a TD. Hurts also ran the ball 16 times for 86 yards and a rushing TD, providing the vast majority of Philadelphia’s offense. Top WR A.J. Brown has cooled off a bit as of late.

A matchup at home against the struggling Packers should be no problem for the Eagles, but their recent struggles have erased any confidence that they would win this game comfortably. Aaron Rodgers has been playing better as of late, and managed to beat the Cowboys two weeks ago. I think this game will wind up being a lot closer than a lot of people expect it to be. That being said, Philadelphia is still an entirely better team, and should ultimately lock down the win, even if they fail to cover the spread.