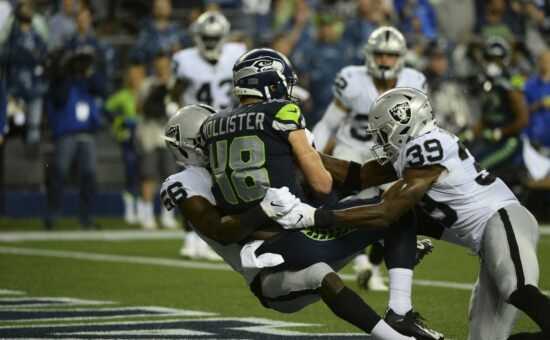 If you’re looking for the best NFL predictions for the Raiders vs Seahawks game – look no further! – Vegas Odds has you covered.

This Week 12 game features a matchup between the 3-7 Raiders and the 6-4 Seahawks.

The Raiders survived an overtime clash in Denver on Sunday, winning 22-16, and improving to 3-7 on the year. Las Vegas will need to turn that win into 7 more in a row, if they want to match their record from last season. More realistically, the Raiders are looking at a premium draft selection next year. They may have one of the worst records in the league, comparable to the sheer level of talent on their roster. The management and coaching staff may be to blame, although the Raiders ownership seems to be content with them.

QB Derek Carr played well once again in the win, going 23 for 37 for 307 yards, and 2 TDs. He posted a 106.5 passer rating on the day, improving his number on the season to 91.6. Carr ranks 8th in the NFL in QBR, supported by the addition of star WR Davante Adams.

In Sunday’s win, Adams had 7 catches for 141 yards and 2 TDs, including the game-winning TD reception. He now has 64 catches for 925 yards and 10 TDs in 10 games so far this season. RB Josh Jacobs also played well in the win, rushing 24 times for 109 yards.

The Seahawks were on a bye last week, remaining 6-4 on the year. During their bye, they watched the 49ers win and improve to 6-4, tying the division lead. With San Francisco heating up, the pressure is on for Seattle to continue exceeding expectations and holding the division lead. Their loss against Tampa Bay prior to the bye cooled them off at a bad time. They’ll have to find their momentum anew. Fortunately, they’re matched up with a subpar Raiders team this week. Even if they lose the division, a wild card spot is in play.

Regardless of whether the Seahawks end up as NFC West champions, a wild-card team, or missing the playoffs entirely, this season was still a massive success for them. Rookie RB Kenneth Walker has shown his star potential, and QB Geno Smith has exceeded every expectation as Seattle’s new starter. They traded away Russell Wilson, who is now having a load of trouble in Denver, and netted the Broncos 1st-round pick in the process. The Seahawks are on track to make the playoffs, and get a top-10 pick in next year’s draft.

This should be a thoroughly enjoyable game with high-flying offenses on both sides. I don’t think it’s impossible for the Raiders to get the win, but the crowd noise at Lumen Field in Seattle is sure to have an effect. The Seahawks are well rested and in need of a win, following some increased pressure by the 49ers. All of those factors indicate a Seattle win, and I feel good about picking them to improve to 7-4 with a win against the Raiders here, though I wouldn’t consider it to be a lock.