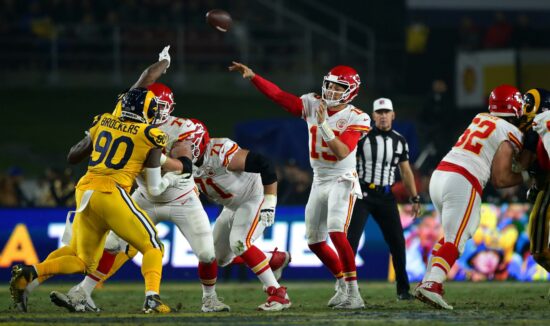 If you’re looking for the best NFL predictions for the Rams vs Chiefs game – look no further! – Vegas Odds has you covered.

This Week 12 game features a matchup between the 3-7 Rams and the 8-2 Chiefs.

The Rams lost their 4th consecutive game on Sunday, dropping to 3-7 on the season. Following their 27-20 loss against New Orleans, they’ve now lost 6 of their last 7 games. Los Angeles’ rapidly dwindling hopes of returning to the playoffs have all but disappeared. Without WR Cooper Kupp, who will be out until January with an ankle injury, the Rams have no real offense. QB Matthew Stafford went 11 for 18, for 159 yards and 2 TDs in the loss, highlighted by a 62-yard touchdown pass to 2nd-year wide receiver Tutu Atwell.

After winning last season’s Super Bowl, the Rams entered this season hoping to repeat as champions. Instead, they’ve slid all the way to the bottom-5 in the NFL. Their 1st-round pick in 2023 was traded to the Lions in the Matthew Stafford trade, adding complications.

While Los Angeles may be in for a total reset and rebuild following this season, they undoubtedly have no regrets with the trades they made, which resulted in them winning the Super Bowl. With a championship under their belts, they now shift their focus to rebuilding.

The Chiefs improved to 8-2 on the season, following their 30-27 win over the Chargers on Sunday night. Kansas City has now won 4 games in a row, and 6 of their last 7. They sit in first place, atop both the AFC West division, and AFC conference as a whole. Patrick Mahomes was exceptional in the win, completing 20 of 34 passes for 329 yards and 3 TDs. His connection with TE Travis Kelce was palpable. Kelce reeled in 6 catches for 115 yards and all 3 touchdowns. Rookie RB Isiah Pacheco rushed 15 times for 107 yards.

The emergence of Pacheco could be massive for Kansas City, who lost starting RB Clyde Edwards-Helaire to a high ankle sprain. They’ve also gotten limited production out of veteran Jerick McKinnon, who fumbled in the game on Sunday. The Chiefs lost their new acquisition at WR, Kadarius Toney, to a hamstring injury, and continue to deal with a multitude of issues in their receiving corps. A healthy set of wide receivers, and some improvement from an inconsistent defense, would make Kansas City truly unstoppable.

The last time these teams met, it ended in a fantastic 54-51 gauntlet on Monday Night Football, that still holds up as one of the best games in the past few seasons. While Kansas City is still playing close to that level, the Rams are in a completely different place now than they were back then. The Chiefs are very heavy favorites in this game, expected to blow Los Angeles out this time around. While I agree the Chiefs will win, and confidently, I wouldn’t bet on any NFL team to cover a 16-point spread most weeks. It rarely happens.