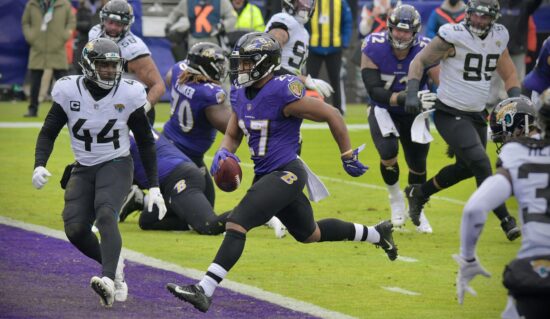 If you’re looking for the best NFL predictions for the Ravens vs Jaguars game – look no further! – Vegas Odds has you covered.

This Week 12 game features a matchup between the 7-3 Ravens and the 3-7 Jaguars.

The Ravens took down the Panthers, 13-3, on Sunday, improving to 7-3 on the season. The victory helped Baltimore maintain their slim lead over the AFC North division. QB Lamar Jackson struggled in the win, going 24 for 33 for 209 yards and an INT. Jackson has been in an extended slump since about week 3 of this season. He has posted a 79.3 passer rating in the 7 games since then. Despite Jackson’s struggles and the issues of the offense as a whole, the Ravens were able to get the win, thanks to their impressive defense.

Baltimore previously had one of the NFL’s best defenses, but improved even further with the trade deadline acquisition of Bears LB Roquan Smith, who had 7 tackles and a sack in the win. LB Patrick Queen was also heavily involved, with 12 tackles and 0.5 sacks.

The Ravens newly upgraded defense may be the NFL’s best overall unit. They’ve dominated the opposition over the last few weeks, and get a juicy matchup this week against a young and inexperienced Jaguars team. Baltimore’s defense could make things ugly.

The Jaguars were on bye last week, allowing them to remain at 3-7 on the season. Prior to the bye, Jacksonville lost a tough game against the surging Chiefs. They managed to defeat the Raiders in the week before that, and have started to play moderately well as of late. They’ll look to continue that momentum coming out of the bye, against a tough Baltimore defense. WR Christian Kirk has had a great first season in Jacksonville. In 10 games, he’s racked up 52 yards for 679 yards, and 7 TDs, leading the team in receiving.

On defense, the Jaguars have also made some minor strides as of late. 2022 1st-overall pick Travon Walker has 2.5 sacks and a handful of QB pressures on the season. His performance has not been the best out of the top defensive players taken in the draft, but he has still flashed his upside at times. DE Josh Allen has also been a key factor in Jacksonville’s pass rush this season. They’ll need to apply significant pressure to Lamar Jackson this week to keep up with Baltimore. This will be a tough test for the Jaguars.

While the Jaguars have been showing some marginal improvement, they’re still not quite at the level of consistently beating good teams. The Ravens have a sensational defense, that is likely to cause a bevy of issues for Trevor Lawrence and company. I wouldn’t be surprised if this game ended up close if it’s low-scoring, but I ultimately feel good about picking Baltimore to win with confidence.