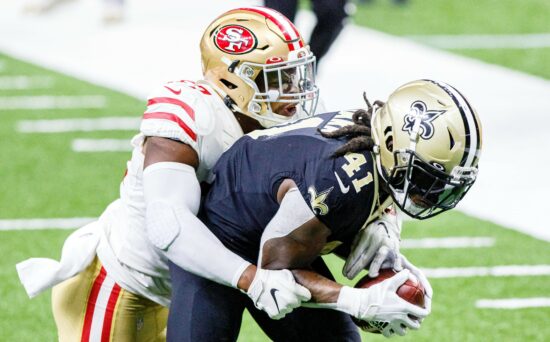 If you’re looking for the best NFL predictions for the Saints vs 49ers game – look no further! – Vegas Odds has you covered.

The Saints defeated the Rams on Sunday, improving to 4-7 on the season. Thanks to a subpar NFC South division, New Orleans is not out of playoff contention quite yet, sitting just 1.5 games out of first place. An extended winning steak would salvage their season, but the Saints will have to navigate through a difficult schedule to do so. This week, they get the red-hot 49ers on the road. They’ll need another great game from QB Andy Dalton, who went 21 for 25 for 260 yards, 3 TDs, and a 149.6 passer rating in Sunday’s win.

Rookie WR Chris Olave continues a great start to his NFL career. He finished with 5 catches for 102 yards and a TD on Sunday. He now has 51 catches for 760 yards and 3 TDs on the year. Olave has been the Saints most productive offensive player this season.

On defense, New Orleans has finally begun to show some improvement. After allowing nearly 29 points per game over their first 7 games of the season, the Saints have allowed just under 17 ppg in their last 4 games. They need to continue that trend this week.

The 49ers embarrassed Arizona on Sunday, winning 38-10, and improving to 6-4 on the season. It was a thoroughly impressive win for San Francisco, who has now won 3 consecutive games. They’ve tied the Seahawks for the lead in the NFC West division, and have emerged as the clear favorite to win it. QB Jimmy Garoppolo completed 20 of 29 passes for 228 yards and 4 TDs in the win on Sunday. TE George Kittle caught 4 of those passes for 84 yards and 2 TDs. His health has been a major factor in the 49ers’ success.

San Francisco’s defense was equally impressive in the win over Arizona. They intercepted the Cardinals twice, and shut them out completely in the 2nd half. DE Nick Bosa got yet another sack, increasing his total to 10.5 sacks on the season. The defense has officially gotten back on track, and the offense is thriving. Kittle isn’t the only one making an impact. RBs Eli Mitchell and Christian McCaffery, as well as WRs Deebo Samuel and Brandon Aiyuk, have been fully involved on a weekly basis. The 49ers are at their best.

The Saints have been playing pretty well as of late, but it would be difficult to feel confident picking them on the road against a team as hot as the 49ers. San Francisco is playing their best football of the season right now, and should continue that en route to yet another victory. While I feel confident that the 49ers will win, I’m not as sure that they’ll cover the spread. Either way, I’ll take the 49ers to win against the Saints here, and improve to 7-4 on the season.