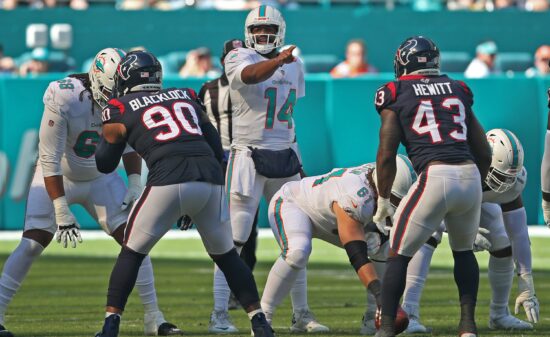 If you’re looking for the best NFL predictions for the Texans vs Dolphins game – look no further! – Vegas Odds has you covered.

The Texans lost once again on Sunday, this time falling 23-10, to the Commanders. The loss dropped them to 1-8-1 on the season, as they continue to hold the NFL’s worst record. Houston is on track to lock down the #1 overall pick in the 2023 NFL Draft. In the loss on Sunday, QB Davis Mills went 19 for 33 for 169 yards and 2 INTs, good for a 46.2 passer rating. Mills holds the league’s 3rd-worst QBR among starting quarterbacks. It has become exceedingly likely that the Texans will select his replacement in the upcoming NFL draft.

A loss this week would mathematically eliminate Houston from the playoffs, though they have already been realistically knocked out, barring some incredible unforeseen circumstance. They’ll shift their focus to building on the few positives from this year in the future.

One of the Texans biggest bright spots has been rookie RB Dameon Pierce. Unfortunately, Pierce has hit a rough patch as of late. On Sunday, he rushed 10 times for just 8 yards, averaging less than 1 yard per carry. Houston’s offense as a whole has been ineffective.

The Dolphins were on bye last week, remaining 7-3 on the season. They watched the Bills win during the off week, tying up the division lead. The AFC East has all four teams within 1 game of each other, so the Dolphins will need to continue winning to keep pace. Fortunately, they sit at 7-0 with starting QB Tua Tagovailoa healthy, having only lost the 3 games this season that he missed due to injury. The argument could be made that the Dolphins, with Tagovailoa available, are the best team in the entire league, this season.

The key to Miami going from Wild Card team to Super Bowl contender is their defense. Their offense led by Tagovailoa, and featuring RB Raheem Mostert, as well as WRs Tyreek Hill and Jaylen Waddle, has been consistently exceptional. On the other hand, the defense has had some good performances and some bad ones. If they can return to their 2020 level of play on defense, the Dolphins would become legitimate championship contenders. For now, they need to focus on avoiding a trap game loss against the abysmal Texans.

There isn’t a whole lot to say about the prediction for this game. The argument could certainly be made that this is the league’s worst team playing on the road against the league’s best team. While many may not have the Dolphins ranked quite that high, this still should be an easy win for them. Barring any major surprises, I expect Miami to run away with a confident home victory here.