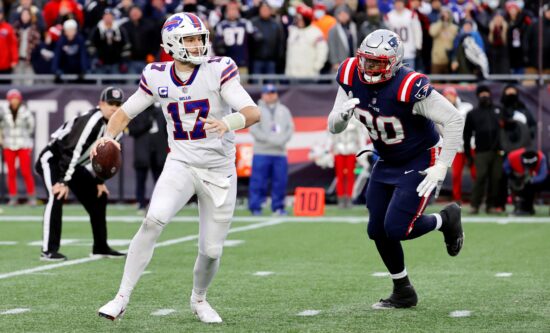 If you’re looking for the best NFL predictions for the Bills vs Patriots game – look no further! – Vegas Odds has you covered.

This Week 13 game features a matchup between the 8-3 Bills and the 6-5 Patriots.

Bills Back on Track

The Bills defeated the Lions in a competitive 28-25 game to kick off last week’s Thanksgiving football slate. It was a predictably close game on the road against a Detroit team that had been playing much better football as of late. Nonetheless, Buffalo was able to get the victory, led by QB Josh Allen, who completed 24 of 42 passes for 253 yards, 2 TDs, and 1 INT. Allen was also active on the ground, rushing 10 times for 78 yards and a TD. The Bills are tied for 1st place in the AFC East with the Dolphins, with both at 8-3 on the year.

Josh Allen further showcased his impressive talents on Thursday. After the Lions tied things up 25-25, with just 23 seconds left in the game, Allen led the Bills 48 yards down the field in 20 seconds, putting them within range for the game-winning field goal attempt.

Tyler Bass would go on to nail that kick and seal the win for Buffalo. This week, they’ll get another tough road test, this one against a division rival in the Patriots. The Bills have won 4 of their last 5 games against New England, after having lost the previous seven.

The Patriots lost to the Vikings, 33-26, in a high-flying game on Thursday night. New England led for a large portion of the game, entering the 4th quarter with a 26-23 lead, before being shut out in the 4th quarter, and losing the game. QB Mac Jones had another solid game, going 28 for 39 for 382 yards and 2 TDs, posting a 119.8 passer rating on the day. Despite that, the Patriots were unable to outgun Minnesota’s talented offense. They currently sit in 8th place in the AFC playoff standings, just 1 game out of a playoff spot.

While the Patriots offense thrived for the first 3 quarters of Thursday’s game, their defense struggled all throughout the night. It was a rare lacking performance for a New England defense that entered the game with the fewest points allowed among all NFL teams this season. They completely shut down Minnesota’s running game, forcing them to average just 2.1 ypc on the night. On the other hand, their pass defense was fully exposed by Kirk Cousins and Justin Jefferson. They need to bounce back against Buffalo to stay alive.

Just five years ago, it would have seemed like an impossibility to feel confident about picking the Bills over the Patriots. For 15 years, from 2004 to 2019, New England dominated Buffalo, going 30-3 against them in 33 games. That being said, times have changed. Tom Brady is no longer with the Patriots, and the Bills now have a superstar QB of their own. This game is likely to be very close, regardless of the winner. I expect to see a low-scoring, defensive battle, with the Bills emerging victorious on the road.