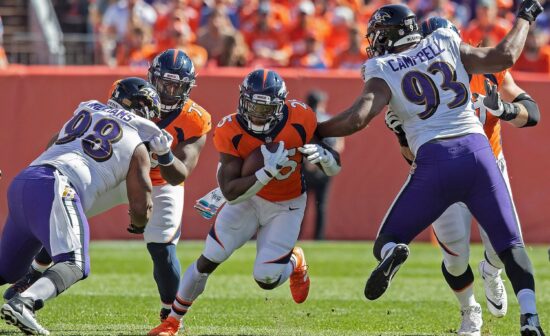 If you’re looking for the best NFL predictions for the Broncos vs Ravens game – look no further! – Vegas Odds has you covered.

This Week 13 game features a matchup between the 3-8 Broncos and the 7-4 Ravens.

The Broncos lost their 3rd consecutive game on Sunday, falling to the Panthers, and dropping to 3-8 on the season. Denver has now lost 7 of their last 8 games and have virtually no chance of making the postseason. After entering the season with playoff hopes and high expectations, this season has been nothing short of catastrophic for the Broncos. A bad season is one thing, but they also traded away what is now projected to be a top-3 draft pick to the Seahawks for QB Russell Wilson, in addition to 3 other early picks.

As if crippling their draft capital wasn’t bad enough, Denver decided to do the same to their cap space, giving Wilson a $245 million extension to his contract. They’ll now have to figure out a way to fix a 3-8 team without any key draft picks or top free agents.

Baltimore got flashes of déjà vu on Sunday, blowing a late-game lead, and losing to the Jaguars, 28-27. Last season, the Ravens started out the year 8-3, before losing 6 straight games, finishing 8-9, and missing the playoffs. They started this season 7-3, and now have a surprising loss that could spur on another losing streak. Fortunately, the Ravens get a home matchup against the collapsing Broncos this week. While this should be an easy win, Baltimore could win up spiraling if they somehow lose. They need to win here.

The Ravens defense was performing at an exceptional level leading up to Sunday’s game in Jacksonville. Since acquiring LB Roquan Smith, they had led the league in defensive efficiency. That all came to a halt against the Jaguars. Baltimore’s defense was thoroughly torn apart by Jaguars QB Trevor Lawrence, especially on the game-winning drive. After taking a 27-20 lead with less than 2 minutes to go in the game, the Ravens were unable to stop Jacksonville, allowing them to score the game-winning TD and 2-pt conversion.

It’s hard to imagine a Broncos team that is 1-7 in their last 8 games winning here. They’ll face a stringent Ravens defense on the road. Baltimore is fighting to stay alive in the playoff race, and will be playing pissed off after last week’s last-second loss. Meanwhile, Denver has been playing defeated football, showing barely any offense on a weekly basis. I expect the Ravens to clamp down on Denver’s struggling offense and take home a double-digit win this week.