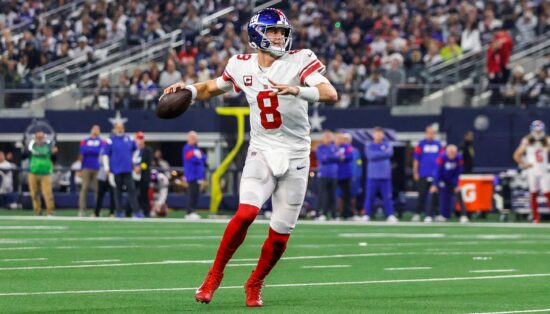 If you’re looking for the best NFL predictions for the Commanders vs Giants game – look no further! – Vegas Odds has you covered.

This Week 13 game features a matchup between the 7-5 Commanders and the 7-4 Giants.

The Commanders got yet another win on Sunday, defeating the Falcons, and improving to 7-5 on the season. They’ve now won 6 of their last 7 games, after starting the season 1-4. Washington is 5-1 since switching to Taylor Heinicke at quarterback. Heinicke had a decent game in the win, completing 14 of 23 passes for 138 yards, 2 TDs, and 1 INT. Washington’s rookie RB, Brian Robinson, thrived on Sunday, rushing 18 times for 105 yards, and catching 2 passes for 20 yards and a TD. Robinson averaged over 5.8 ypc on the day.

The true reason behind Washington’s resurgence has been the improvement of their defense, which as finally begun to play at the level they expected. The Commanders also expect 2020 2nd-overall pick Chase Young to finally return to the lineup imminently.

The 6-1 stretch that Washington has been on has raised their chances of making the playoffs from 11% to 66%. A win over the Giants this week would offer an opportunity to further raise that number to 88%, while a loss would drop it to 44%. This game is crucial.

The Giants lost badly against the Cowboys last Thursday, dropping to 7-4 on the year. They’ve now lost 2 of their last 3 games, and watched their playoff chances drop from 82% to 50%. New York has been unable to overcome several key injuries, but may return key players this week against Washington. It comes at the right time for the Giants, in a must-win game with major playoff implications. The two Giants vs Commanders matchups in the next 3 weeks will very likely decide which of the two teams makes the postseason.

QB Daniel Jones played well in the loss against Dallas, going 21 for 35 for 228 yards and 1 TD. He connected with a handful of WRs filling in for injuries. Besides Darius Slayton, the leading receivers on the day for New York were; Richie James, Isaiah Hodgins, Chris Myarick, and Lawrence Cager. While Daniel Jones and RB Saquon Barkley have made due with the injuries thus far, the defense had played a major role in supporting them. Now with major injuries plaguing the defense as well, the Giants are having trouble winning.

This is a game with massive stakes for both teams. They’ll face each other again in D.C. in two weeks, so this win is even more crucial to the Giants, who will be on the road for round two in Week 15. Unfortunately for New York, they have completely cooled off, and are looking a lot more like the underwhelming team people expected them to be heading into the season. In the meantime, Washington has been scorching hot. This game should be close, but I see the Commanders coming away with the win on the road.