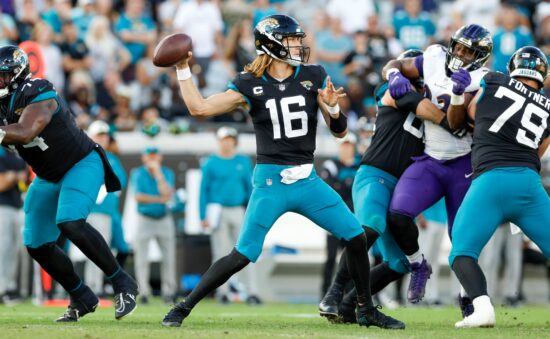 If you’re looking for the best NFL predictions for the Jaguars vs Lions game – look no further! – Vegas Odds has you covered.

This Week 13 game features a matchup between the 4-7 Jaguars and the 4-7 Lions.

The Jaguars came from behind to win a thrilling game against the Ravens on Sunday. They trailed Baltimore from 5 minutes left in the 2nd quarter, all the way until a FG put them back ahead with less than 5 minutes to go in the game. After taking that lead, Jacksonville allowed the Ravens to drive 75 yards down the field in just over 2 minutes, scoring a TD, and taking a 27-20 lead. The Jaguars then responded with a 75-yard TD drive of their own, completed in under two minutes, and capped with the game-winning 2-pt conversion.

2nd-year QB Trevor Lawrence was exceptional in the win. He completed 29 of 37 passes for 321 yards and 3 TDs, posting a 129.8 passer rating for the game. It was the type of performance that Jacksonville had hoped for when selecting Lawrence first overall.

WR Zay Jones had a breakout game of his own on Sunday. He reeled in 11 catches for 145 yards, leading both teams in each category. Aside from the run game, which struggled in light of Travis Etienne Jr’s injury, Jacksonville has been firing on all cylinders.

The Lions lost a competitive game against the Bills on Thursday, falling to 4-7 on the season. Despite the loss, it was an encouraging performance for Detroit, who has looked significantly more competitive over the last few weeks. The loss against Buffalo snapped their 3-game winning streak, but they’ll have two more home games to get back on track before heading back on the road. QB Jared Goff played well on Thursday, completing 23 of 37 passes for 240 yards and 2 TDs. Goff is playing his best football since 2018.

Detroit’s defense was ultimately unable to stop the Bills on Thursday, allowing a 20-second drive at the end of the game that put them in field goal range for the game winning kick. Even so, the Lions defense showed major improvements, holding Buffalo’s skilled offense to under 20 points through the first 3 quarters. 2022 2nd-overall pick, Aiden Hutchinson, has been having a fantastic rookie season, but was virtually non-existent against the Bills. He’ll look to get back on track against the Jaguars team that passed him up.

This game features a matchup between two teams that have been the laughing stock of the league for far too long, and are hoping to finally break through, and get back into relevancy. This matchup also features the top two picks from the 2022 NFL Draft. 1st-overall selection by the Jaguars, Travon Walker will take on the 2nd-overall selection by the Lions, Aiden Hutchinson. Both have had solid seasons so far, but I think Hutchinson will make the bigger impact. I’ll take the Lions to squeak by with a win at home this week.