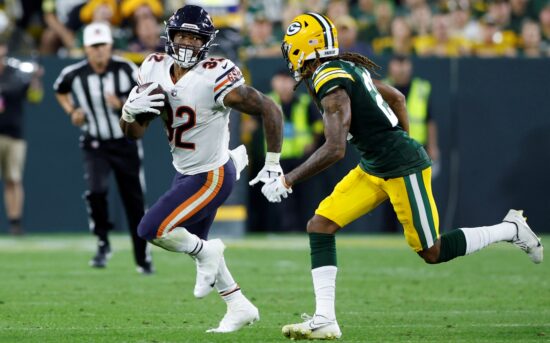 If you’re looking for the best NFL predictions for the Packers vs Bears game – look no further! – Vegas Odds has you covered.

This Week 13 game features a matchup between the 4-8 Packers and the 3-9 Bears.

Packers Heating up Too Late

The Packers came up short against the Eagles on Sunday night, losing 40-33, and dropping to 4-8 on the season. It was another good game for Green Bay, who has improved significantly over the last few weeks. Unfortunately, it’s too little, too late, with the Packers having just a 3% chance of making the playoffs. Their only realistic path is to win out and get to 9-8, which seems pretty unlikely, and may not be enough. Rodgers hurt his ribs in the loss, and was replaced by 2020 1st-round pick Jordan Love, who flashed his talent.

Green Bay needs to decide between starting a banged-up Aaron Rodgers and giving Jordan Love a chance to start. While the Packers have been described by head coach Matt LaFleur as “Aaron Rodgers’ team”, it may be beneficial to get Love some meaningful snaps.

After all, Love is expected to be the QB of the future in Green Bay. An MVP season in 2021 by Rodgers may have delayed things, but a far worse performance this year should make the decision next year easier for the Packers. They may as well start easing Love in.

Chicago was embarrassed by the Jets on Sunday. The 31-10 blowout resulted in their record dropping to 3-9 on the season. With virtually no chance to make a playoff run, the Bears are fully focused on the race for the 2nd overall pick in the upcoming NFL draft. They need to replace several key pieces on a defense that has ranked as the worst in the NFL since the trade deadline. Unfortunately, the Bears traded away their 2nd-round pick for Chase Claypool, so they’ll need to acquire a guaranteed asset with their 1st round pick.

While the defense continued to look abysmal, Chicago’s offense was also horrific in Sunday’s loss. This is less of a concern for the Bears, though, as their offensive struggles were due to the absence of QB Justin Fields. Seeing how much worse the offense is without Fields is actually a point of encouragement for Chicago. Fields’ status is still in question for this week’s game against Green Bay, and the Bears chances of winning will depend on it. Either way, I’d expect them to continue losing, with their focus on the draft.

The total margin of victory in this game will depend on whether or not Justin Fields is able to suit up for the Bears. That being said, I believe the winner will be the Packers, regardless of Fields’ status. Chicago’s defense has prevented them from winning any games over the last several weeks, and Green Bay has finally started to improve on offense, thanks to the emergence of rookie WR Christian Watson. The Packers already won this matchup 27-10 in Week 2, and I think they’ll get another confident win this week.