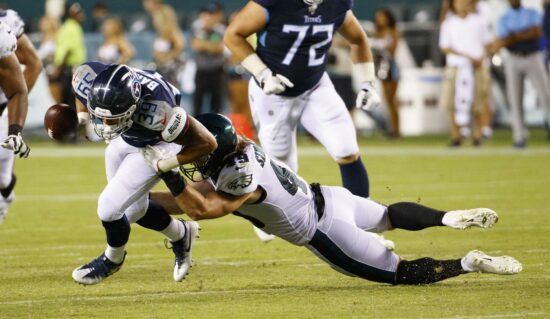 If you’re looking for the best NFL predictions for the Titans vs Eagles game – look no further! – Vegas Odds has you covered.

This Week 13 game features a matchup between the 7-4 Titans and the 10-1 Eagles.

The Titans were unable to hanging on against the Bengals on Sunday, losing 20-16, and dropping to 7-4 on the season. Despite the loss, Tennessee still holds a 3-game lead over the AFC South division, with a 96% chance of winning it. Even so, the Titans will need to beat teams like the Bengals by the time the playoffs arrive, so this loss stings even if it doesn’t affect the standings much. RB Derrick Henry was bottled up in the loss, rushing 17 times for 38 yards, averaging just 2.2 ypc. Tennessee was forced to rely on screen plays.

While the run game struggled, QB Ryan Tannehill had an up-and-down game. Two long screen pass TDs to Treylon Burks and Derrick Henry were highlights. However, with those two plays removed, Tannehill went 20 for 32 for just 171 yards. Their offense is a concern.

With the offense regressing in lieu of Derrick Henry’s midseason slump, the Titans defense has been forced to pick up the slack. They did a good job of limiting Cincinnati’s offense for much of the game, but were unable to prevent them from scoring the game-winner.

Eagles Back on Track

After losing their first game of the season against the Commanders a couple of weeks ago, the Eagles have now gotten things back under control, with back-to-back wins against the Colts and Packers. Each game showed areas for concern, with the offense faltering against Indianapolis, and the defense having a hard time with Green Bay. That being said, they still got the win in both games, moving one step closer to clinching a playoff spot. They can do just that with a win over the Titans this week, or with a Washington loss.

Although they hold the NFL’s best record, nothing is comfortable for the Eagles. Their last three games included a 32-21 loss against the Commanders, and then one-score victories over the 4-6-1 Colts and the 4-8 Packers. This week’s matchup against Tennessee will be the first playoff team from last season that Philadelphia will face in 5 weeks, and will provide a good example of where they stand as a team right now. There is definitely some concern that the Eagles have already peaked, and are moving in the wrong direction.

This game features a matchup between two likely playoff teams, both of which are seen by many as teams that have potentially outperformed their true level thus far. One of these teams will get a signature win, while the other will continue to head in the wrong direction. With Derrick Henry having cooled off over the last few weeks, I’m worried about Tennessee’s ability to generate consistent offense. I believe this game will be really close, but I’ll take the Eagles to ultimately walk away with the win at home.