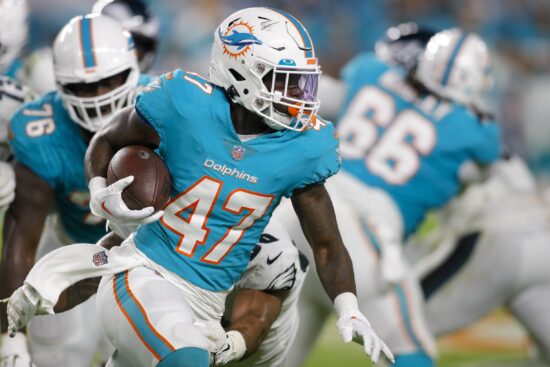 In Week 2 of the 2022 NFL, the Miami Dolphins are coming to M&T Bank Stadium, where they’re without a single win over the Baltimore Ravens in history. In fact, the Dolphins have won only once in Baltimore, back in 1997 when the Ravens were playing at Memorial Stadium that’s been demolished since.

Is it time for Miami to finally beat Baltimore on the road? Oddsmakers from top football betting sites don’t think so. Instead, they see the hosts are odds-on favorites in Sunday’s game.

Ambitious Dolphins Going for a Win

A few days before the start of the 2022 NFL season, Youtuber-turned-boxer Jake Paul vowed to bet $1 million on the Dolphins winning the Super Bowl LVII. He’s one on a long list of NFL fans who think this could be Miami’s best season in two decades.

As a reminder, the Dolphins have made the postseason only four times in the 21st century, with the 2020 season being the one when they went past the Wild Card Playoffs. This season, their ambitions are higher, and we think it’s justified.

Their offense has gotten much better lately, with the acquisition of Tyreek Hill who’s one of the best receivers in the league. Plus, their quarterback Tua Tagovailoa is now in his third year with the Dolphins, meaning that he’s got more experience than last season when he threw 263/388 for 2,653 yards and 16 touchdowns, while also scoring three running TDs on his own. One of those running TDs, he scored against Baltimore, in a game that Miami won 22-10.

Lamar Jackson in the Spotlight (As Always)

Last season, Miami’s offense was sixth worst in the AFC points-wise. This time, they’re bound to do better. But what about their defense? They were the ones to carry the Dolphins throughout the 2021 season and we expect them to do at least equally well in 2022.

Does this mean they can stop Lamar Jackson & Co. on September 18? Well, Miami’s secondary should be able to cause problems to the Ravens’ passing game. This goes especially knowing that Jackson is now without his favorite receiver from the last season – Marquise Brown was traded away in the offseason.

The Ravens might also struggle with their rushing game. First of all, they lost two of their leading running backs from 2021 – Latavius Murray and Devonta Freeman – to free agency. Secondly, two of their arguably best runners in the 2022 season – J.K. Dobbins and Gus Edwards – are out injured.

What this means is that their QB will have to work a lot in that department as well. Still, Jackson won’t complain. This guy loves running with the ball as evident from the fact that he was Baltimore’s rushing yards leader in 2021.

Dolphins vs Ravens Predictions and Picks