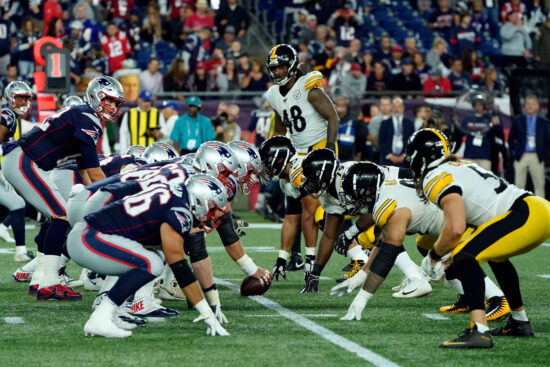 If you’re looking for the best NFL predictions for the Patriots vs Steelers game – look no further! – Vegas Odds has you covered.

This Week 2 game features a classic matchup between the 0-1 Patriots and the 1-0 Steelers.

The Patriots lost their Week 1 matchup against the Dolphins by a score of 20-7. 2nd-year quarterback Mac Jones had a decent game, finishing 21 for 30 for 213 yards, 1 TD, and 1 INT. Despite that, the Patriots were shut out for 3 of 4 quarters on Sunday. An offense this inconsistent is a rare sight in New England, and Bill Belichick will be applying a lot of pressure on his guys to make a big step forward in Week 2. The Patriots defense was their best asset, though they were unable to force a Dolphins turnover. 4 balls were fumbled in the game, 2 by each team, but all 4 were recovered by Miami.

After struggling in Week 1, all focus will go towards a Week 2 matchup against a stifling Steelers defense that turned the defending AFC champion Bengals over 5 times. After turning the ball over three times on Sunday, the Patriots will need to be extremely disciplined against the Steelers to stay in the game.

The Patriots lone touchdown in this game was caught by wide receiver Ty Montgomery, who was acquired over the offseason after spending time with the Packers, Ravens, Jets, and Saints over the past 8 seasons.

The Steelers defeated their bitter rivals and the defending AFC champions, the Cincinnati Bengals, on Sunday, 23-20. Pittsburgh turned Joe Burrow over 4 times in the first half, entering the locker room during the break with a 17-6 lead. Unfortunately, the Bengals climbed right back, eventually tying the game up 20-20. An extra point would have given the Bengals the win, but it was blocked by Minkah Fitzpatrick, sending the game into overtime. New starting quarterback Mitchell Trubisky had an underwhelming Steelers debut, carried to an opening win by his defense.

In overtime, the Steelers watched another game winning attempt by Bengals kicker Evan McPherson miss, giving them the opportunity to win the game on a field goal of their own. Their first attempt from 55-yards out hit the upright, but the next time they got the ball, Chris Boswell was able to knock it through from 53-yards away, sealing the win for Pittsburgh. Unfortunately, the Steelers lost superstar defensive end T.J. Watt to a pec injury, that could cause him to miss the entire season if he is required to have surgery to recover. The defense loses a major piece if Watt cannot return this season.

The Steelers and Patriots are both led by young quarterbacks hoping to ride their defenses to victory. While Mitchell Trubisky certainly has more experience than Mac Jones, they are both still putting things together. This game should be a defensive battle and a real slug fest, but the loss of T.J. Watt could prove to be a major problem for the Steelers. Ultimately, I think they can get it done at home against a Patriots offense that had little to show in Week 1 against the Dolphins.

Fantasy Football Freebie: Expect a gritty and defensive matchup here with not much fantasy upside. The best option may very well be the Patriots defense. After playing moderately well in the loss against the Dolphins, expect New England’s defense to give Mitchell Trubisky and the Steelers a hard time to start this one out. If they can avoid garbage time points, they’ll be in for a good overall game.