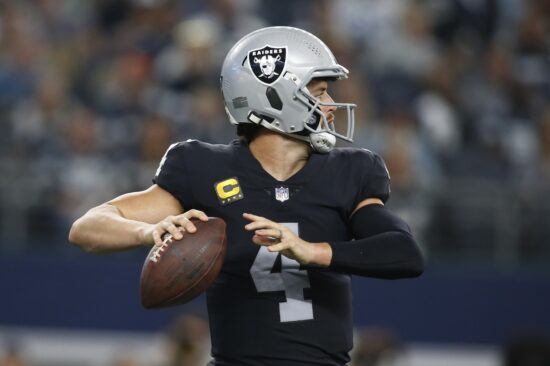 Both teams had high hopes and ambitions before the season began, yet after the first two games, the enthusiasm disappeared a little bit. The Raiders are coming off a terrible loss to the Arizona Cardinals, against whom they had a 20-point lead. The Titans experienced one of the worst defeats in the last several seasons, with the Bills rolling over Mike Vrabel’s crew.

Is Car Elite or Overhyped?

This season will tell us whether Derek Carr is an elite quarterback or just a hyped, overrated star. He has arguably the best receiving corps in the NFL with Davante Adams, Darren Waller, Hunter Renfrow, etc. From what we saw right now, the Raiders’ QB is underachieving a lot.

Against the Cardinals, the Raiders blew a 20-point lead, the biggest in their history, allowing the rivals to come back and win in the overtimes, 29-23. It was a devastating blow for all the home fans, who couldn’t believe what hit them.

Josh Jacobs had only 69 yards on 19 carries, and as time goes by, we see that the Raiders have problems establishing the ground game. On the other side, Waller caught a TD pass, as well as Adams, but the latter had only two catches in seven targets, and the only one to bale for that is Carr.

The Titans’ fans didn’t get used to seeing their team suffer beating but rather the opposite. Though, a 41-7 defeat in Buffalo is a humbling experience for the entire fanbase and the team.

Ryan Tannehill was mauled by the Bills’ secondary, throwing for two picks, without touchdowns, and just 117 yards. What can we possibly say about the way the Bills stopped the most dominant rusher in the past few years, Derrick Henry, who had 25 yards on 13 carries? We’ve never seen some team freezing Henry like that.

On the other hand, the defense was destroyed into pieces by the Allen-Diggs connection, who had three touchdowns. All in all, this was a very nasty experience for the Titans.

Raiders vs Titans Head to Head

The most recent meeting was in 2019 when Tennessee defeated the Raiders 42-21 on the road. Back then, it was in Oakland, not Las Vegas.

The Titans looked pretty pale in these two games, unlike the Raiders, who had some flashes during the same period. Our pick here would be LVR to win because we believe the Titans’ secondary is terrible this year. With all the weapons in his arsenal, Carr should solve this and bring his team a victory.