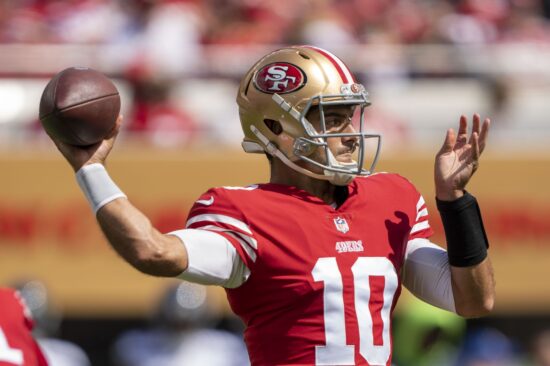 It’s pivot time for the San Francisco 49ers, who are turning the keys of the offense back to Jimmy Garoppolo after starting QB Trey Lance was knocked out for the season with an ankle injury last week. Garoppolo led San Francisco to the NFC Championship Game last season, and helped navigate a 27-7 victory to Seattle last week to put the team to 1-1 on the season.

The Broncos have some questions of their own coming into the week three 49ers vs Broncos matchup, as last week’s 16-9 victory over Houston was the definition of ugly. That followed a 17-16 loss in Seattle in week one and so far the returns for Denver aren’t high for either new coach Nathaniel Hackett or $245 million quarterback Russell Wilson.

Offseason Paying Off for 49ers

They pretty much lucked into it by not finding a trade partner even after taking his playbook last season, but the 49ers not parting ways with Garoppolo this Spring looks like a brilliant move in light of Lance’s injury. He threw for 3,810 yards last year with 20 TDs and 12 INTs, but also knows the offense and offers veteran experience. Had they not kept Garoppolo San Francisco would possibly be turning to 7th round pick Brock Purdy at the QB position in the 49ers vs Broncos matchup.

Garoppolo came in last week after Lance’s injury to go 13/21 for 154 yards and a 38-yard TD pass to Ross Dwelley. You have to take the 4″ of rain that fell in Chicago in week one into account, but Lance wasn’t very impressive in that game going 13/28 for 164 yards and an INT. There are many who think the 49ers are in a better position to win with Garoppolo than Lance who only has 4 starts in his two-year NFL career.

It’s always tough going into Denver to get the win, but the Broncos haven’t shown much through two games this season and thus the 49ers are -1.5 road favorites on the Vegas odds. Aside from the experienced Garoppolo being under center, the 49ers have shown a solid ability to run the ball (189 yards last week) and have the #3 scoring defense in the NFL allowing just 13.0 ppg.

Can Broncos Get Offense Going in Game 3?

Denver went into the half tied 6-6 with Houston, not exactly the offensive showing that fans expected after trading for Wilson in the offseason. This comes after the Broncos had just three points in the second half against Seattle in a game where some – any – production could have gotten them the win instead of a 17-16 loss.

Wilson has just 2 TD and an INT in two games at the helm of Denver’s offense, and he’s also completing just 58.9% of his passes. Last week against the Texans Wilson completed just 14 of 31 passes, or $205,882 for every completion. It’s very early in his tenure, but fans are not impressed so far and things aren’t going to get any easier with Nick Bosa (3 sacks) and San Francisco’s #1 ranked total defense coming to town Sunday night.

Even though their offense has had its share of issues, the Broncos defense has held up their end of the bargain allowing just 13.0 ppg – the same as San Francisco. Houston had just 234 total yards in Denver last week although San Francisco does have more weapons than the Texans.

It’s early in the season but Denver’s Nathaniel Hackett looks overmatched as a head coach. Perhaps his success last season as Green Bay’s offensive coordinator had more to do with having Aaron Rodgers than because of Hackett’s prowess. It would be no shocker if Wilson finally puts it all together in week three and leads Denver to the win – but it’s also possible that the 33-year-old has his better days behind him.