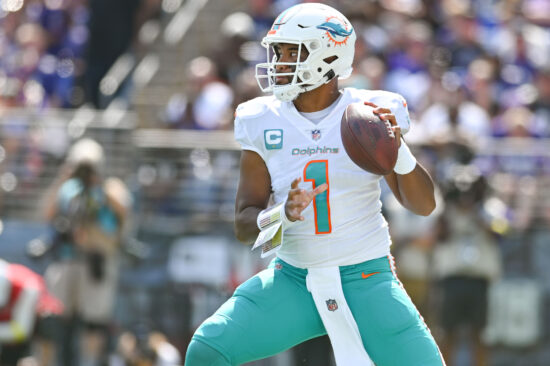 One of the more interesting NFL games this weekend is the one between the Buffalo Bills and the Miami Dolphins, currently two undefeated teams. They have high hopes for this campaign, with the guests aiming for the Super Bowl trophy and the Dolphins being one of the dark horses for the same.

This is a true test for either side and a delight for the fans; therefore we expect to see fireworks in Florida.

Without any doubt, the top contender for the NFL MVP trophy so far has been Josh Allen. In two games, he has 614 yards, seven touchdown passes, and one rushing touchdown. His team demolished the Super Bowl champions, the Rams, and one of the top teams in the AFC Conference, the Titans.

Though, he wouldn’t be there if it wasn’t for fantastic WR, Stefon Diggs, with the former Minnesota Vikings star having 270 receiving yards with four touchdowns so far. He caught three of them against the Titans in the most recent matchup, which ended 41-7 in the Bills’ favor.

We also have to mention the defense, arguably the best in the league. Von Miller’s landing strengthened an already outstanding unit, with the veteran making an immediate impact on the field.

Tua and His Targets

As much as we love Tua, and speaking about him as the crucial player in Miami, Tyreek Hill’s arrival was the turning point for this franchise. Cheetah brought so many new options with him, increasing Tua’s numbers, as well as others.

The Fins rallied back from a 21-point minus in Baltimore to beat the Ravens, 42-38. Tua threw six touchdowns, having 469 passing yards, with two picks, but throwing perfect passes in the essential moments.

Meanwhile, Hill had 190 receiving yards with two scores and Jaylen Waddle 171, also for two TD catches. They became the first pair of wide receivers in NFL history with such productivity.

Bills vs Dolphins Head to Head

Buffalo was better than the Fins in both games last year, 35-0 on the road, and 26-11 at home. They have seven straight victories over Miami and nine in the past ten contests.

Miami’s power is the offense; once it gets going, it can’t be stopped. Though, we think that the Bills won’t allow this to happen, with Miller and the rest of the crew having more quality than the Fins’ O-line. This is the main reason why we pick the guests to win here.