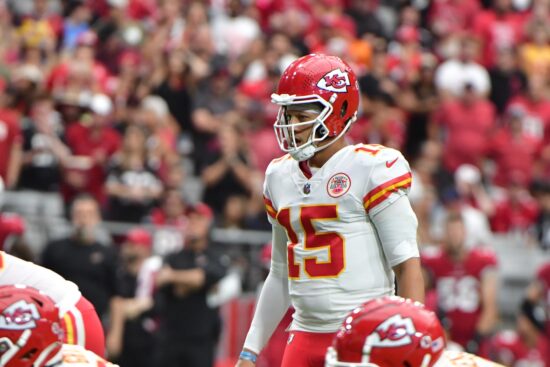 The fans of Kansas City and Indianapolis couldn’t feel more differently about the way their boys started the 2022 season. The Chiefs’ fans must feel proud of Mahomes & Co. as they are 2-0 so far. When it comes to the Colts fans, it’s just the opposite – they are left downhearted by their team which remains winless with a 0-1-1 record.

Ahead of the start of the 2022 NFL season, there were some concerns regarding the Kansas City Chiefs’ offense. With Tyreek Hill moving to Florida, a seemingly huge hole was left in the Chiefs’ receiving department. But after two weeks of NFL action, it seems that the hole is nothing but a small dent – the Chiefs have already scored six passing touchdowns in the post-Hill era.

The man most responsible for the Chiefs’ impressive passing game in 2022 is their quarterback, Patrick Mahomes, who just turned 27 a couple of days ago.

At the moment of writing, he’s ranked no.1 in terms of passer rating with 127.9. In the two weeks of the 2022 NFL, Mahomes has thrown for 595 yards with 73% completion for seven touchdowns and zero interceptions.

Most of his TD passes happened in Kansas’ first game of the season, in which they demolished the Arizona Cardinals 44-21 on the road. In Week 2, he threw for two TDs against the talented defense of the Los Angeles Chargers.

The game in question finished 27-24 in the Chiefs’ favor, mostly thanks to the good defensive display of a couple of their players, most notably, cornerback Jaylen Watson who made a 99-yard interception on Thursday night.

After two games on the road, the Colts are coming back to Indiana. Unfortunately for them, their homecoming probably isn’t going to result in a party. Instead, they are likely to lose on Sunday, at least according to top NFL betting sites. It’s not just because of the fact that they’re facing one of the most impressive teams in the NFL; it’s also because they’ve been pretty disappointing thus far.

The Colts are winless with a 0-1-1 record. They started the season with a 20-20 tie with their divisional foes, the Houston Texans. They were huge favorites in that game, with the Vegas odds of -385.

It was a similar story in Week 2 when they faced the Jacksonville Jaguars. Despite coming to Florida as -160 favorites, they ended up humiliated. The final score was 24-0 for the team that’s coached by Kansas’ former offensive coordinator Doug Pederson.

The Colts’ defense was horrible in that game, but it’s their offense that really needs to feel embarrassed. Their new QB Matt Ryan had an evening to forget with 16-of-30 for 195 passing yards with three interceptions.

Their running game was also below-par in Week 2, with the 2021 rushing yards leader Jonathan Taylor gaining only 54 yards for his team on nine carries.

The Colts are completely out of shape and to make things even worse, they’re going to miss a couple of important players in Week 3, most notably linebacker Shaquille Leonard, so when it comes to our NFL predictions for this one, things aren’t looking too good for the boys from Indianapolis.

What all this means is that the Colts are probably heading toward another disaster. They’re going to lose on Sunday and it’s going to be ugly.