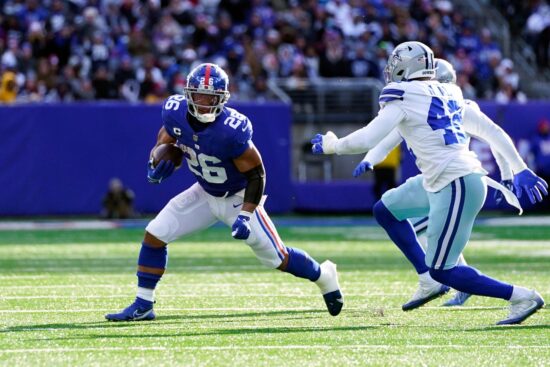 The competition hasn’t been the greatest, but the New York Giants are still off to a 2-0 start after close wins over Tennessee (21-20) and Carolina (19-16). Those aren’t great offensive showings, but New York is running the football and playing solid defense which is why they are -1.5 favorites on the Vegas odds for the Cowboys vs Giants matchup on Monday night.

Dallas picked up a surprising 20-17 win over the Bengals last weekend as +7.5 underdogs. That was the Cowboys’ first game without QB Dak Prescott who will be out a few weeks with a thumb injury. Backup Cooper Rush will try to pick up a second straight win in this NFC East showdown.

Rush Trying to Prove Himself

The Cowboys didn’t look great offensively in week two, but it was a better performance than their 19-3 loss to Tampa Bay in the season opener. Prescott was 14/29 for 134 yards against the Bucs while Cooper Rush got the start last week going 19/35 for 235 yards and a TD with no INT.

Many experts though Dallas would run the ball more last week with Prescott out, and they did slightly going for 71 yards on 18 carries against Tampa Bay and having 107 yards on 27 carries against Cincinnati. The Giants have been stout against the run so far this year though, notably holding Derrick Henry to 82 yards on 21 carries in the win over Tennessee in week one and with half of Christian McCaffrey’s 102 yards last week coming on one 49-yard run.

Dallas probably won’t have as explosive of an offense without Prescott compared to last year’s squad that had the #1 total yard (407) and scoring (31.2 ppg) offense in the league. They may actually have a better game plan though which includes running the ball and playing solid defense. Through two games Dallas has the #6 total yard defense (300.5), is 10th in points allowed (18.0) and have amassed 8 sacks led by Micah Parsons who has four already.

New York will take the 2-0 start no matter how they get the wins. New coach Brian Daboll showed some trust in his team opting for the late two point conversion that led to the 1-point win in Tennessee in week one and got a 56-yard Graham Gano field goal in the 4th quarter to pick up the 19-16 win over the Panthers last Sunday.

Daboll’s offense doesn’t yet have the passing prowess that he showed last year as the offensive coordinator with the Bills, but this run game has impressed through two weeks. The Giants ran for 238 yards in week one against Tennessee and Saquon Barkley was a workhorse last Sunday with 21 carries for 72 yards. Giants offensive lineman Andrew Thomas might be the best left tackle in the NFL.

New York’s defense has been very solid through the first two weeks and they’ll get a boost by facing Rush instead of Prescott. Prescott threw for 302 yards and 3 TDs in the 44-20 win over New York last October and hit 28/37 in the 21-6 victory in New York in December.

The Giants are allowing just 197 pass yards per game so this one is going to be decided on who has the better running game. With their offensive line and Barkley looking resurgent – and New York being at home – the lean on Monday night is on the Giants -1.