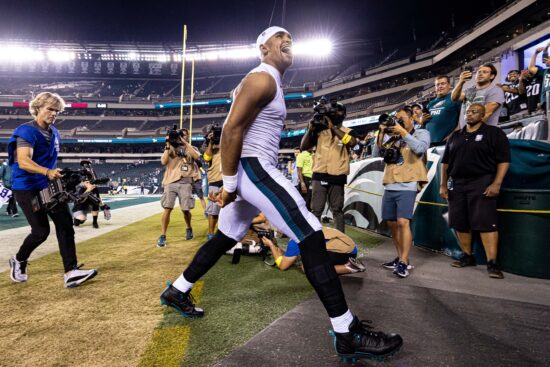 The Philadelphia Eagles vs Washington Commanders is an NFC East clash, which is taking place at FedEx Field on Sunday, September 25 in Week 3 of the 2022 NFL. The matchup is intriguing for several reasons, starting with the fact that Washington’s new quarterback Carson Wentz is playing against his old team.

Speaking of QBs, Philly’s signal-caller is Jalen Hurts, who is 2-0 against Washington. Both of those wins happened last season, and the Eagles are now looking for their third-straight win over their divisional foes. Are they going to make their plan come true? NFL bookmakers sure think so, giving the visitors the role of a 7-point favorite.

Can Philadelphia cover the spread? Or maybe we’ll see Washington upset the odds? To see what we think, keep reading this Eagles vs Commanders prediction piece.

The Eagles are 2-0 in the 2022 NFL season, with wins over the Detroit Lions and Minnesota Vikings. In Week 1, they beat the Lions on the road 38-35, with all four of their touchdowns scored via rushing. One of those was scored by their second-year QB Jalen Hurts, who also had an okay performance in terms of passing – 18/32 for 243 yards and no TDs or interceptions.

Those who didn’t put an okay performance in the first round are Philly’s defenders. Its defensive team conceded 35 points, which came as a shock to everyone considering that they played against the Lions whose average last season was just 19.11. In, comparison, Philadelphia’s scoring average was 26.11 in 2021.

However, it later became apparent that the Lions are actually pretty good in the offense in 2022 – they destroyed the Commanders 36-27 in Week 2. The same week, the Eagles thrashed the Minnesota Vikings 24-7, proving that they can be good in the defense.

Still, it was their offense that caught the headlines once again. Hurts was the man who practically singlehandedly won the match for the Eagles, going 26/31 passing for 333 yards and one TD, while also scoring two rushing TDs on his own.

Ex-Philadelphia quarterback Carson Wentz started his Washington story with a bang. He threw for four TDs in Week 1 against the Jacksonville Jaguars, which his new team won 28-22. Wentz did, however, also threw two interceptions in that game.

In his second game as a Commander, he threw one fewer interception but also recorded one fewer passing TD. Unfortunately for Wentz, his three passing TDs weren’t enough for his team to beat the Lions. The Commanders’ defense was just too sloppy in that game, which is the reason why they lost 36-27.

With 58 points conceded after two games of the 2022 NFL, the Commanders’ defense is one of the worst in the league. Actually, there are just two teams in the NFC that have allowed more points than them.

We expect to see both teams do great offensively in Week 3, the result of which should be plenty of points on both ends. Still, Philadelphia is the team that looks more lethal right now, which is why our NFL prediction is that they’re going to continue their winning run for at least another week.