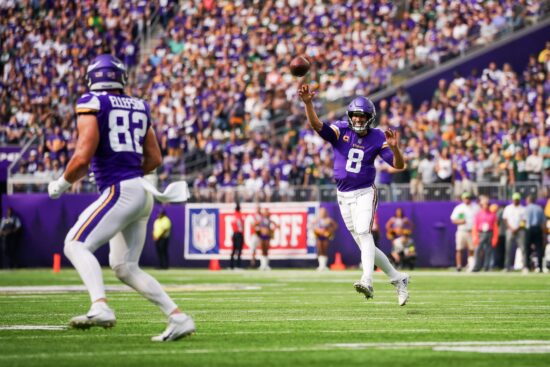 The Minnesota Vikings have been in a Jekyll and Hyde mode in 2022, putting on a great performance against the Green Bay Packers in Week 1, while suffering a humbling defeat to the Philadelphia Eagles in Week 2. In Week 3, they’re welcoming the Detroit Lions at U.S. Bank Stadium on Sunday, September 25, a team that’s been punching above its weight so far this season.

Same as Minnesota, Detroit too is 1-1, which is very surprising knowing that the Lions finished with a 3-13-1 record last season.

Dan Campbell’s boys started their 2022 NFL campaign with a loss to the Philadelphia Eagles. No surprise there as they were +210 underdogs before the game. Actually, what is surprising is that they lost by just three points (38-35).

Their offense did a great job in that game, with quarterback Jared Goff throwing 21/37 for 215 yards and two touchdowns, with just one interception. They did well passing-wise, but their rushing game was even better with three TDs scored.

Unfortunately for the Lions, their defense wasn’t as great in Week 1 – they conceded 38 points. However, in Week 2, they did better. The Lions held the Washington Commanders to 27 points, which was enough for their first win of the season as their offense did a marvelous job once again.

The Lions scored 36 points against the Commanders, with Goff throwing for four touchdowns, two of which were caught by second-year WR Amon-Ra St. Brown.

The Vikings started the 2022 NFL season with a win over the Green Bay Packers. The score was 23-7, which sure sounds amazing. However, this could have more to do with the Packers’ poor performance than with the Vikings’ good display. It’s just that Minnesota’s defense didn’t have to work hard to stop Aaron Rodgers & Co. in their first game without Davante Adams on the receiving end.

Led by quarterback Kirk Cousins, the Vikings offense did a fairly good job in Week 1. In Week 2, however, it was a whole different story. Against Philadelphia, they scored just seven points, with Cousins having an evening to forget. He threw 27/46 for 221 yards and just one touchdown while getting three of his passes intercepted.

The Vikings are favored to win in Week 3 and there’s a good reason for that – they have much better players than the Lions. However, Detroit’s offense has been in fabulous form in 2022, meaning that we could see a real thriller on Sunday.