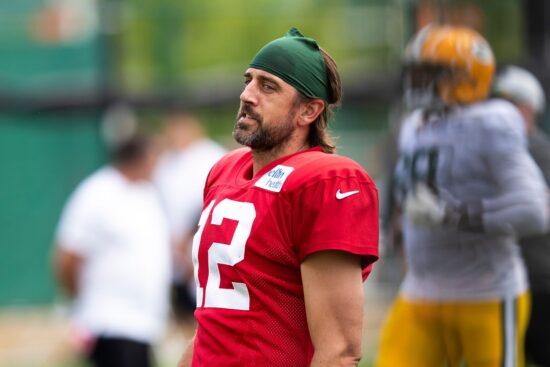 Is there a better Sunday afternoon for a gridiron fan than the one with Aaron Rodgers and Tom Brady competing against another? We don’t think there is. Two of the finest quarterbacks in the history of this sport clash at the Raymon James stadium with just one thing on their mind – to win.

Brady has the edge over Rodgers right now, winning the last two meetings, one in the NFC Championship game back in January 2021.

For the moment, it is obvious that Rodgers doesn’t have the receivers as he did in the near past, and even though he threw 234 yards against the Bears, and two touchdowns, the true force in the Packers’ game were the runningbacks.

Aaron Jones and AJ Dillon broke the Bears’ defense, and these two guys created the swing for the hosts to win that one. Green Bay rushed for 203 yards, with Jones delivering a touchdown on the ground and through the air. He had 132 rushing and 39 receiving yards.

Sammy Watkins had 93 receiving yards on three catches, but it is obvious that the Packers still struggle to establish a consistent pass game, even with Rodgers leading the way. So expect to see Matt LeFleur using his RBs frequently in this event.

Bucs Want Three in a Row

Even without Mike Evans, who was ejected because he wanted to present his boxing skills rather than his NFL knowledge, the Buccaneers and Brady finally defeated the New Orleans Saints in one regular-season matchup.

In one very tough and gritty matchup, Brady’s pass to Breshad Perriman that led to a touchdown made a difference, creating a swing that would boost Tampa Bay’s and kill the Saints’ morale. Brady ended the night with only 190 passing yards and one TD, but with a win as well.

On the other side, we need to mention the Buccaneers’ defense, because they had six sacks on Jameis Winston, three picks, and two recovered fumbles. You really can’t ask more than that.

Packers vs Buccaneers Head to Head

The first meeting between Brady in Tampa and Rodgers was in October 2021, when Tampa blew away the Packs at home, 38-10. After that, they met at Lambeau in January same year, in the NFC game, with the Bucs winning again, 31-26. They later clinched the Super Bowl as well.

The Bucs are our favorites here because Green Bay still adjusts to the new circumstances and the fact that the receiving corps is weaker than the backfield. On the other side, we have the Bucs, who are already in full speed, which is why we bet on the hosts to win.