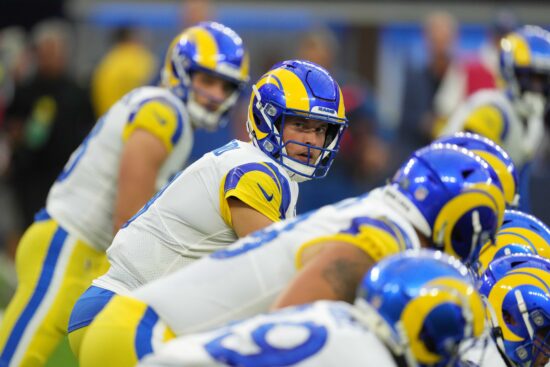 One of the oldest matchups in the NFL, the Los Angeles Rams vs Arizona Cardinals rivalry has been going on since 1937. The Rams lead the series 47–39–2, but it wasn’t always like that. In fact, before Sean McVay took over as the Rams coach in 2017, the Cardinals had a lead. With him at the helm, the Los Angeles franchise is 10-1 against Arizona.

Are we going to see McVay’s boys triumph again? NFL bookmakers sure think so – they see the Rams as four-point favorites in Week 3.

The Rams Have a Cure for Super Bowl Hangover

The Rams started the 2022 NFL season with a humiliating 31-10 loss to the Buffalo Bills, which made football pundits start talking about “Super Bowl hangover.” However, McVay’s men proved they’re not affected by it by getting a win in Week 2.

However, it wasn’t an easy win. They beat the Atlanta Falcons 31-27, failing to cover the spread due to a disastrous performance in the fourth quarter when they conceded 17 points. If it weren’t for cornerback Jalen Ramsey, they’d probably lose that game as well. But Ramsey showed why he’s considered one of the best defensive players in the NFL – he caught an interception with 1:13 left on the stopwatch.

The Rams were very sloppy in the final quarter of the game, but before that, we saw them put on a decent performance. Matthew Stafford went 27/36 for 272 yards and three touchdowns. He did get two of his passes intercepted, the second of which sparked Atlanta’s surge in the fourth quarter.

Stafford is now leading the NFL in interceptions with five of his throws being ruined by the opposition defense. Is this something that should worry the Rams ahead of their trip to Arizona? Probably not. The thing is that Stafford is a gunslinger QB who’s not afraid to take a risk. Last season, he led the NFL with 17 interceptions, but his team still managed to win the Super Bowl.

Arizona Cardinals Should Thank Murray for Being 1-1

The Cardinals started the season with a 44-21 loss to the Kansas City Chiefs. It was expected, as the Cards entered the game as five-point underdogs. They were expected to lose the Week 2 game as well, but they upset the odds and beat the Las Vegas Raiders 29-23 after overtime.

It was a great comeback for Kliff Kingsbury’s men who were 20-0 at halftime. Kyler Murray’s show then followed, with the QB passing for one touchdown, scoring one rushing TD, and scoring a two-point conversion.

He was brilliant against the Raiders, but can he do the same against the Rams? Probably not, as he doesn’t seem to like playing against this team. He is 1-5 against the Rams, with a passing percentage of 62.8 for a total of 1,399 yards (233.2 on average) and seven touchdowns (1.2 per game). Murray also has six interceptions in the Rams vs Cardinals games.

The Rams did get to their first win of the season last weekend, but in Week 3, they need to do even better. They need to cover the spread for the first time in the 2022 NFL season.