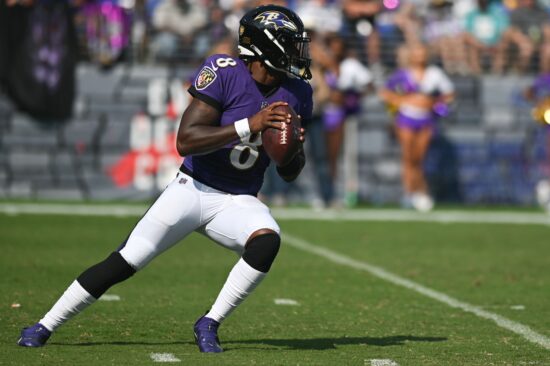 If you’ve come looking for some NFL predictions, look no further – Vegas Odds has you covered!

The Baltimore Ravens travel to Foxborough in Week 3 to take on the New England Patriots on Sunday, September 25. Both teams are 1-1 in 2022, each losing to the Miami Dolphins.

After beating the New York Jets 24-9 in the opening round, the Ravens lost to Dolphins next weekend. We saw them blew a 35-14 lead coming into the fourth quarter. Their defense completely ruined the job done by Baltimore’s in-form QB Lamar Jackson and his offensive teammates.

The Patriots lost 20-7 to the Dolphins in the first week of the 2022 season. Their defense did a great job in that game, allowing only 13 points. Their offense, on the other hand, was dreadful, scoring just seven points and losing the ball once which resulted in a touchdown for the opposition. The Pats’ offense did (slightly) better in Week 2 when they beat the Pittsburgh Steelers 17-14.

If they want to get to 2-1, they will have to do much better this coming Sunday.

You can think of the Ravens vs Patriots Week 3 game as a big offensive mismatch. The visitors are averaging 31 points per game in 2022, while the Pats offense is scoring just 12 points on average.

The man most responsible for Baltimore’s superb offensive display in the 2022 season is their quarterback, Lamar Jackson. The 2019 NFL MVP is 38/59 after two games, with a total of 531 passing yards and six touchdowns, with just one of his passes getting intercepted.

Being a true double-threat QB, Jackson has also done a lot rushing-wise. He’s got 136 rushing yards on 15 carries for one touchdown. The TD in question happened last weekend when he made a 79-yard run against the Dolphins. Unfortunately for Lamar, his colleagues from the defensive team just couldn’t keep up with him.

Actually, they made his sensational job obsolete by letting the opposition score 42 points in total. To be fair to them, they did play against a super-talented Miami offense with Tua Tagovailoa as the QB and Tyreek Hill as his main target.

In Week 3, the Ravens’ defense should have an easier job on their hands. They’re taking on Mac Jones & Co., who just haven’t been showing a lot in 2022.

The Ravens at Patriots game in Week 3 will be the first time Mac Jones is playing against Baltimore. Judging by what we saw from New England’s second-year quarterback in the two games of the 2022 season, he probably isn’t going to do much on Sunday.

It’s not that Jones isn’t a good quarterback; it’s just that his offensive teammates haven’t been helping him enough. In Week 1, he went 21/30 for 213 yards and one touchdown against the Dolphins, while also getting one of his passes intercepted. The Pats’ offensive linemen allowed him to get sacked two times in that game.

In Week 2, they did a better job, giving up zero sacks and allowing Jones to be hit only on three occasions. As a result, the young QB had the luxury to take more time to exact his throws, which resulted in him throwing 21/35 for 252 yards for one TD and one interception.

In 2022, the Ravens look like a better team than the Patriots. They should win in Week 3, although this could turn out to be a very tense affair. The oddsmakers from top NFL betting sites have set the spread to just three points, but we can’t say we’re 100% positive the Ravens will actually cover it.

That said, our advice is to stay away from spread betting and focus on points instead. We shouldn’t see too many of them on Sunday. The Patriots’ offense just isn’t good enough to score more than 20, while their defense looks capable of holding the Ravens to under three TDs.