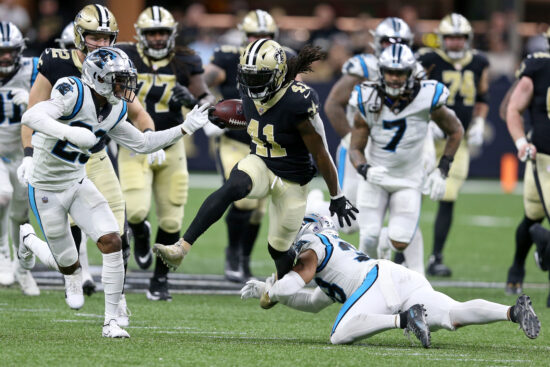 If you’re looking for the best NFL predictions for the Saints vs Panthers game – look no further! – Vegas Odds has you covered.

This Week 3 game features a matchup between the 1-1 Saints and the 0-2 Panthers.

Saints Looking to Bounce Back

After a fantastic come-from-behind win against the Falcons in Week 1, the Saints were unable to produce the same late-game offense against the Buccaneers’ resilient defense. For Week 3, New Orleans will complete the trio of divisional opponents, traveling to take on the Panthers. The Saints were without star running back Alvin Kamara during their loss against the Buccaneers. His availability for this game is still in question. In Kamara’s absence, Mark Ingram rushed well, picking up 60 yards on 10 carries.

Otherwise, expect wide receiver Michael Thomas to lead the way on offense for the Saints. Finally back from a string of injuries that sidelined him for most of the past two years, Thomas has started this season with 11 catches for 122 yards and 3 TDs in two games.

Panthers Desperate for a Win

The Panthers dropped to 0-2 on Sunday, losing to the New York Giants 19-16. After losing at home against the Browns in Week 1, (who lost to the Jets in Week 2), the Panthers may just be the NFL’s worst team so far this season. A home game against a division rival with a struggling offense in the Saints provides the perfect opportunity for Carolina to turn things around before it’s too late. That being said, Baker Mayfield will need to be much better this week against a stringent Saints defense to avoid falling to 0-3.

The Panthers will have to rely heavily on star running back Christian McCaffrey once again in this matchup. McCaffrey rushed for 102 yards on 15 carries in the loss against the Giants, providing Carolina’s only spark on offense. The Panthers defense played well for much of the game against a pedestrian Giants offense, but struggled to get a stop when it counted, allowing Daniel Jones to rush for multiple big first downs. The Panthers need an all-around better performance in Week 3 to avoid a bad loss against a division rival.

Neither offense inspires much confidence in this matchup, but the Saints defense could certainly be the difference maker. While Carolina may be able to avoid the loss at home, their two previous games against the Browns and Giants create a lot of cause for concern. I think this will be another home loss in what could prove to be a very, very long season in Charlotte.

Fantasy Football Freebie: Michael Thomas is finally looking like the player who finished the 2019 season with 149 receptions for 1,725 yards, and 9 TDs. While Thomas no longer has Drew Brees passing to him, or the same volume of targets, he is still a major threat when healthy. With 3 trips to the end zone already this season, Thomas should keep racking up the points in fantasy next week.