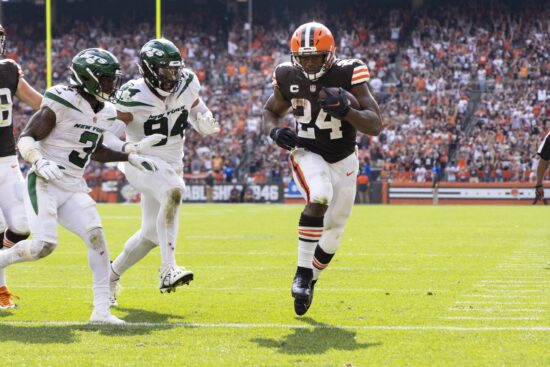 The Pittsburgh Steelers and Cleveland Browns are two AFC North teams whose rivalry goes all the way back to the 1950s. The Browns–Steelers rivalry is the oldest and the most played rivalry in the conference, with 141 games played in total.

The Steelers lead the series 79–61–1, but NFL betting sites think they’re not going to win in their next duel. The game in question is the Steelers vs Browns Week 3 game, which is taking place on Thursday, September 22.

Mitch Trubisky in the Spotlight

Thursday Night Football brings us the first Steelers vs Browns in the post-Ben Roethlisberger era. With Big Ben as their quarterback, the Steelers had a 26-3-1 record against the Browns. In 2022, their signal-caller is Mitch Trubisky, who’s played just one game against Cleveland. As a Chicago Bears QB, he’s 1-0 against this rival, with 14/23 for 193 yards, no TDs, and no interceptions, but with five sacks.

Trubisky hasn’t started his Pittsburgh story too great and was booed by the fans in the Steelers’ first home game of the 2022 season. The game in question saw them lose 17-14 to the New England Patriots, with the QB throwing for one touchdown and getting one of his passes intercepted. The game also saw the Pats’ defense sack Trubisky on three occasions.

The Steelers’ offense hasn’t been great so far in the 2022 season, but their defense has been doing an okay job. This is especially surprising considering that their arguably best defensive player, TJ Watt, is out with a pectoral injury.

One would think that without him on the roster the Steelers are in trouble in Week 3 against the Browns. However, that might not be the case as Cleveland’s offense isn’t that great with Jacoby Brissett as their QB.

With Deshaun Watson suspended, Brissett is the one who’s been in charge of the signal-calling. After two weeks of the 2022 season, he’s 40/61 for 376 yards and 2 TDs, along with one interception.

The Browns’ passing game is likely to get better once Watson returns from suspension, but until then, they’ll probably continue to rely on their running game. Running back Nick Chubb is the man to watch out for as he’s very likely to be super-motivated to do well in Week 3.

Last weekend, he was the center of controversy in the game against the Jets. The game saw him score three TDs against the Jets, which is great. However, some blame him for going for his third TD in the final two minutes of the game, which gave the Jets another attack. They took their chance and pulled back from losing by 13 points to winning by one.

We expect the Browns to win this. Their defense needs to do much better than last weekend, while on the offense, Nick Chubb is expected to have a fantastic evening.