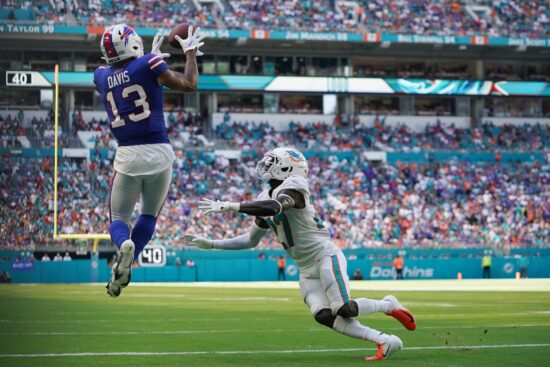 After suffering their first loss of the 2022 NFL season last weekend in (too) sunny Miami, the Buffalo Bills are traveling to Baltimore to take on the Ravens in Week 4.

The last time they played there, they suffered an embarrassing 47-3 loss. This time, however, it should be different. At least that’s what top NFL bookmakers think, who are giving the role of the favorite to Sean McDermott’s men.

Last weekend, the Bills suffered their first loss of the season. They lost 21-19 to the Miami Dolphins on a scorching-hot day at Hard Rock Stadium. The temperature reached 90 degrees with a humidity of around 60%, which is something the Bills aren’t used to.

The heat in Miami was so severe that “breathing was tough” for QB Josh Allen and his teammates. Allen had problems with breathing, tight end Dawson Knox had to get an IV, while wide receiver Stefon Diggs struggled with cramps throughout the game.

With practically all of their key offensive players struggling, it’s no surprise the Bills scored just 19 points that day. That was the first time in almost a year that they failed to go over 20 points in a game. Are we going to see them get back to their usual ways in Week 4?

Baltimore’s QB Lamar Jackson has been nothing short of brilliant in 2022. Three weeks into the 2022 season, he’s got 10 touchdown passes to his name (with just two interceptions), as well as two rushing touchdowns. What this means is that he was the man responsible for every single TD the Ravens have scored so far.

Further, he was also instrumental in their success with field goals. After all, thanks to his passes, the Ravens have recorded a total of 735 pass yards in 2022.

Knowing all this, it’s no surprise that Baltimore is the highest-scoring team in the NFL at the moment, with 99 points in total. When it comes to their defense, it’s a bit different story. With 77 points conceded, they have one of the worst defenses in the league.

The Bills vs Ravens Week 4 game is going to be a real spectacle. Both teams are amazing in the offense, so we can expect to see plenty of points on both ends. Still, when it comes to the defense, it’s Buffalo that has an advantage, which is likely to prove crucial on Sunday.