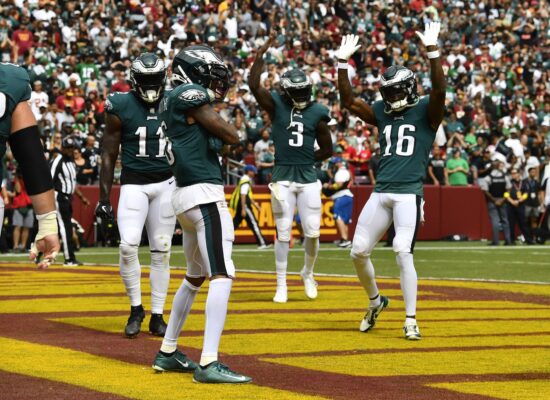 Week 4 brings us an interesting duel between two teams that have been nothing short of impressive since the start of the 2022 season.

One of those is the Philadelphia Eagles, which is the only NFC team with a 100% record so far. The other team is the Jacksonville Jaguars, which some may call the biggest overachiever of the 2022 NFL season. After finishing 3-14 last season, the Jags are 2-1 right now, with wins against two major favorites.

Which team will continue to impress – Jacksonville or Philly? To see what are our NFL predictions, read on…

Doug Pederson’s Offense is On Fire

The former head coach of the Philadelphia Eagles is now the man in charge of the Jacksonville Jaguars. After spending five seasons as the Eagles boss, Doug Pederson got fired in January 2021, finishing his Philadelphia story with a 46-39-1 record.

Pederson’s record with his new team is 2-1. After losing to the Washington Commanders 28-22 on the road in Week 1, the Jags went on to win the following two games. They destroyed the Indianapolis Colts 24-0 at home, then an away win over the favored Los Angeles Chargers followed. Despite entering the game as 7-point underdogs, the Jags ended up winning 38-10.

Jacksonville’s offense is on fire in 2022, with 84 points scored in three game weeks, which accounts for 28.0 points per game on average. The man most responsible for this is their second-year quarterback Trevor Lawrence, who’s thrown for 772 yards in total (#13 in the NFL) and six touchdowns (shared 8th in the league).

The Jags have also scored three rushing touchdowns so far in 2022, each of which happened when running back James Robinson carried the ball over the line. This puts him in the #3 position on the list of rushing TD leaders.

Can the Philadelphia Eagles Go 4-0?

This coming weekend, the Eagles have a chance to do something they haven’t done since the 2005 season – go 4-0.

They came close to doing it in 2016 when they went 3-0 at the start of the first season with Pederson as their head coach. In 2022, their boss is Nick Sirianni who took over when Pederson left last year.

In his first season as the Philadelphia coach, he led the team to a 9-8 record in the regular season, which got them a place in the Wild Card Playoffs (they lost the WC game to the Tampa Bay Buccaneers). In 2022, however, it seems the Eagles are going to do much better.

That’s not surprising given the fact that their key men from the last season are one year older and way more experienced. Their quarterback Jalen Hurts has been phenomenal this season with four touchdown passes and three rushing touchdowns.

Both teams are in top form at the moment, especially when it comes to offense. Still, the Jags are simply more inexperienced than the Eagles, which could play a big role on Sunday. This goes especially because the Eagles will have their fans at the Linc to cheer them on.