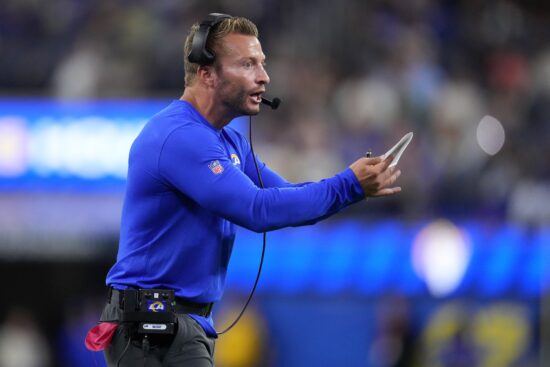 The Super Bowl champions, LA Rams, meet the San Francisco 49ers on Monday night, searching for a win that could further cement them at the division’s top spot. The Rams are coming off back-to-back victories and look solid right now.

Jimmy Garoppolo is back in the lineup, but he didn’t amaze anyone with his recent performances. Right now, the 49ers’ defense is fantastic, but Garoppolo and the boys in the offense struggle a lot.

The Champs Back in the Saddle

Following a demolition at home against the Bills, the Rams regrouped and began thinking straight. The loss couldn’t come at a better moment, reminding them about the new season and the fact that the Super Bowl win is history.

After beating the Falcons, 31-27, they went on the road to win in Arizona against another NFC West rival, the Cardinals, 20-12, displaying superb defense. The Cards have one of the most diversified and balanced attacks in the league, yet they couldn’t get it going against Donald and the boys.

Stafford’s elbow looked well, even though he didn’t have any touchdown passes. All the scores came on the ground, delivered by Cam Akers and Cooper Kupp.

Garoppolo Searching for His Form

Jimmy G didn’t expect to be on the field this early, which was obvious against the Broncos. The Niners lost at the Mile High in an offensive slugfest, 11-10, with Garoppolo having a lot of trouble adjusting to the offensive scheme, even saying at one point to Kyle Shanahan that his plays “suck.” Though, he did look funny with that safety once he stepped outside the end zone.

The 49ers’ O-line allowed four sacks, and their underperforming this year has been a significant problem. Trey Lance endured a solid beating before his injury, and for the moment, this part of the team isn’t looking good.

The defense has been the brightest area of the 49ers’ game and possibly the best in the NFL right now. They allow miserable 246 yards from the scrimmage, only 167 through the air. If only Garoppolo could be a little better, the 49ers could attack the top of the division, maybe the conference as well.

Rams vs 49ers Head to Head

The all-time series between the 49ers and the Rams is pretty tight, with the team from San Francisco having 75 wins, and the Rams 68. Three events didn’t have any winners. The Rams won the previous matchup, the NFC Conference game, 20-17, while the 49ers previously had six consecutive triumphs.

You won’t see too many points here. Neither side has established a proper running game, and they do tend to struggle and oscillate in the offense. Meanwhile, the respective defenses are in excellent shape, harassing the rivals, which is why we take under 42.5 points in this case.