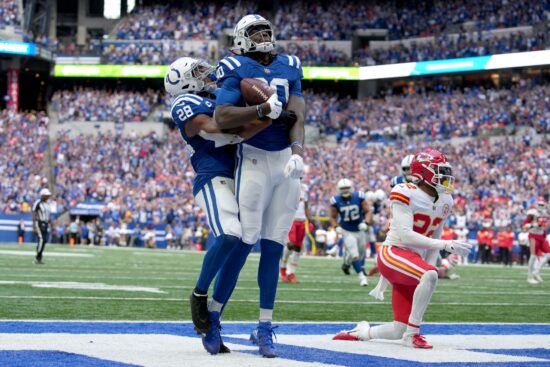 The Tennessee Titans and the Indianapolis Colts are two AFC South rivals, each with just one win in the 2022 NFL season. The two will meet in Week 4 at Lucas Oil Stadium in Indianapolis on Sunday, October 2.

The rivalry between these two teams started in 1995 and since the Colts have won 35 games while losing 18. However, in recent years, it’s the Titans who have been the dominant force. In fact, they won four of their last five games against the Colts.

Last season, the Titans won both of their games. This time, however, top NFL bookmakers think the Colts are more likely to triumph. Are they right to think so? – Let’s see…

Running back Derrick Henry is arguably the best Tennessee player, and he’s been that for years. This is why it’s kind of surprising that he hasn’t done much in Titans vs Colts games. He’s played 12 games against Indy, recording a total of just six rushing touchdowns.

The reason why this is surprising is that he’s scored much more against Tennessee’s other two AFC South rivals. He’s got nine rushing TDs in 10 games against the Houston Texans, as well as 14 TDs in 11 games against the Jacksonville Jaguars.

Knowing that the Titans’ passing game hasn’t been that great in 2022, Henry will have to really step up on Sunday if he wants his team to win.

The Indianapolis Colts must feel good about themselves after what happened last weekend. They defeated the favored Kansas City Chiefs 20-17 despite going into the final quarter with a seven-point deficit.

Quarterback Matt Ryan was the one who did well when his team needed it the most, so we can only expect to see more from him. Of course, we also expect to see running back Jonathan Taylor perform well, and perhaps even score his first TD since Week 1.

Still, knowing that the Colts haven’t scored more than 20 points in a game in 2022, we can’t expect to see them blow out the opposition on Sunday.

The Titans are relying on their running game with nearly 48% of their plays being run plays. No surprise there when they got Derrick Henry on the roster. Still, we don’t think he’s going to do much in Week 4 as he’ll be battling one of the best rushing defenses in the NFL.

Knowing that the Colts are the team that’s allowed fewer yards per carry than any other team in the league (2.6 per rush), we can only assume that Henry isn’t going to score too many TDs.

Add to that the fact that the Colts offense is averaging just 13.33 points per game, and you’ll realize why we probably won’t see too many points in the Titans vs Colts Week 4 game.