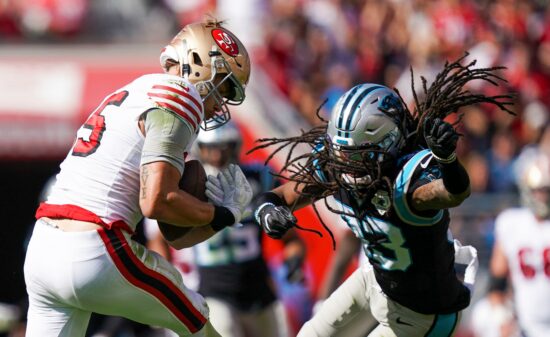 If you’re looking for the best NFL predictions for the 49ers vs Panthers game – look no further! – Vegas Odds has you covered.

After losing quarterback Trey Lance to a season-ending ankle injury in Week 2, the 49ers were forced to turn back to previous starter Jimmy Garoppolo. In Week 3, Garoppolo showed signs of rust, and San Francisco came up short against the Broncos 11-10. However, last week he looked much more comfortable, finishing 16 for 27 for 239 yards and a touchdown. The 49ers ended up winning that game against the Rams confidently, improving to 2-2 on the season. Wide receiver Deebo Samuel had a great game, reeling in 6 catches for 115 yards and a TD. Running back Jeff Wilson Jr. rushed for 74 yards in the continued absence of Eli Mitchell.

The real key to the 49ers win on Monday was their defense. Linebacker Dre Greenlaw had a career day, finishing with 15 total tackles. Additionally, San Francisco managed to sack the Rams a whopping seven times. They also forced three turnovers. The 49ers two defensive ends, Joey Bosa and Samson Ebukam, finished with 2 sacks apiece, leading the defensive domination of the Rams.

San Francisco now gets a juicy matchup against Baker Mayfield and a struggling Panthers offense. While their defense should have a great game, Garoppolo and the offense need to avoid another mediocre performance. The Panthers defense will be one of the toughest defenses the 49ers have faced all season thus far.

The Panthers dropped to 1-3 on the season, with an embarrassing 10-point loss at home against the Cardinals. Aside from their Week 3 win against the 1-3 Saints, Carolina has had three very disappointing games. Baker Mayfield was brought in over the offseason to be an improvement over previous QB Sam Darnold, but he has had an awful start to the year. His QBR for the season is 15.3, which currently ranks dead last in the league. Mayfield went 22 for 36 for 197 yards, a TD, and 2 INTs on Sunday. Unfortunately, he didn’t get much support from his receiving core. Running back Christian McCaffrey did most of the work, finishing with 9 catches for 81 yards.

The Panthers defense has been their lone saving grace this season. Led by undrafted linebacker Frankie Luvu, they’ve managed to keep the abysmal offense in contention each week. Luvu had another standout performance on Sunday, finishing with 11 total tackles and a fantastic interception that he returned for a touchdown. If Carolina can get any semblance of offensive success going, they could still be in contention for the NFC South division. They need to lean more on running back Christian McCaffrey, who has the playmaking ability to bail out Baker Mayfield and the rest of the offense when they are unable to produce otherwise.

Both of these teams have excellent defenses and struggling offenses. I expect this to be a gritty, defensive matchup where the best secondary prevails. A defensive score like the one Luvu had last week could be game changing in what should be a low-scoring game, but it’s hard to predict something like that ahead of time. Overall, the 49ers are the better team, and their defense is bound to cause trouble for a bottom-ranked Panthers offense, especially after shutting down the defending Super Bowl champions last week.

Fantasy Football Freebie: Once again, it’s a defense that offers the best value in this game. The 49ers defense was tremendous last week against the Rams with 7 sacks and 3 takeaways, and gets a far juicier matchup this week against Carolina. While the game being on the road makes things a little bit less than perfect, the 49ers defense should still have another huge game this week.