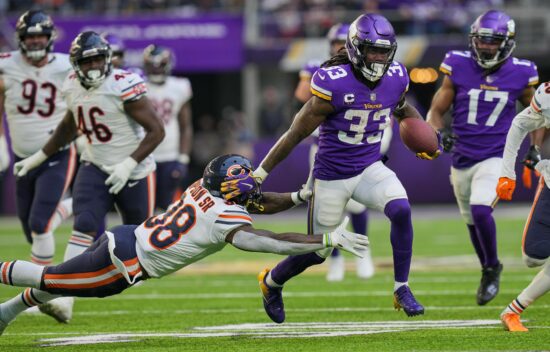 If you’re looking for the best NFL predictions for the Bears vs Vikings game – look no further! – Vegas Odds has you covered.

This Week 5 game features a matchup between the 2-2 Bears and the 3-1 Vikings.

The Bears lost to the Giants on Sunday, falling to 2-2 on the season. Despite their 2-2 start, Chicago has not looked very good, struggling especially on offense. Quarterback Justin Fields ranks dead last in the league so far this season with a 58.7 passer rating. After losing starting running back David Montgomery to a knee injury in Week 3, the Bears relied on Khalil Herbert to pick up the slack. Herbert had a great game in Week 3, but struggled to find similar success against the Giants defense in Week 4. Chicago is in desperate need of help on offense. They currently rank 2nd to last in the NFL in scoring, averaging about 15.5 points per game.

The Bears defense played a major role in getting them their two wins this season. That being said, they were vulnerable against the Giants, allowing multiple large rushing plays from quarterback Daniel Jones. This allowed New York to score a couple of quick touchdowns, which Chicago’s anemic offense was never able to recover from.

Through 4 games, Justin Fields is 34 for 67 for 471 yards, 2 TDs, and 4 INTs. The Bears offense has issues all over the board, and the inefficiency of Fields isn’t completely his fault. That being said, such a tumultuous start to his second season after a rough rookie year has to be raising some questions in Chicago about the future of the quarterback position.

Vikings off to a Great Start

The Vikings improved to 3-1, thanks to a strong road win in London over the Saints. Wide receiver Justin Jefferson had his biggest game since Week 1, finishing with 10 catches for 147 yards. Minnesota’s only bad performance came during Kirk Cousins’ prime time curse on Monday Night Football. During their three daytime wins, the Vikings have looked like one of the best teams in the league. They’ve only gotten to 4-1 or better once in the past decade, but they’ll have a great opportunity to do so at home against the vulnerable Bears. Wide receiver Adam Thielen has also heated up. He has 14 catches for 133 yards and a TD in the past two weeks.

The Vikings defense was imperfect against the Saints, giving up 25 points in the final 3 quarters of the game. They should be able to bounce back against a Bears offense that has struggled all season long. On Sunday, linebacker Eric Kendricks led the way for the defense, finishing with 7 total tackles. Minnesota managed to force two fumbles, recovering them both, which made a huge impact on the game. Unfortunately, the Vikings lost rookie safety Lewis Cine to a gruesome compound leg fracture during Sunday’s win. Cine will need to undergo 2 surgeries to recover and is likely done for the season.

This is another game where every indication points towards the Vikings winning. To play devil’s advocate, the Bears could win if their defense can shut down Justin Jefferson, Adam Thielen, and Dalvin Cook. Even if they do, it’s hard to imagine the Vikings defense being unable to handle a floundering Bears offense at home. There are way more playmakers on the Vikings offense than the Bears. I see a 2+ score win coming for the Vikings in Week 5.

Fantasy Football Freebie: The Vikings defense hasn’t been exceptional this year, but they’ve been solid and have made the big plays when it matters. A matchup against the Bears putrid offense at home is a prime opportunity for Minnesota’s defense to feast. The Giants defense had their best game of the season against the Bears last week, and I expect something similar for the Vikings.