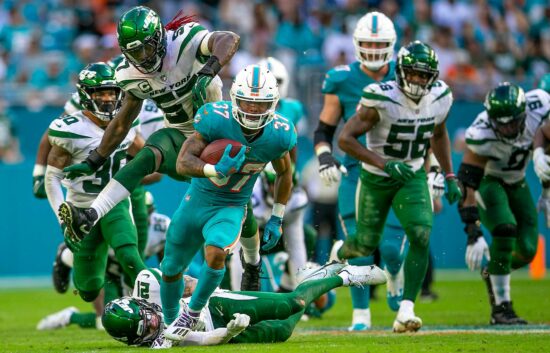 If you’re looking for the best NFL predictions for the Dolphins vs Jets game – look no further! – Vegas Odds has you covered.

The Dolphins showed the world on Thursday just how little the NFL’s treatment towards head injuries has really changed over the years. In Week 3’s win over Buffalo, Tua Tagovailoa was hit hard on the head, causing him to stumble and fall a couple of different times as he tried to get back up and walk around. This is one of the NFL’s “no-go” signs, and should result in an immediate shutdown of action under the NFL’s concussion protocol. Yet, the Dolphins ruled it to be a “back injury” and allowed him to remain on the field. Four days later, they cleared him to play against the Bengals on Thursday Night Football, where he suffered another bad head injury.

With Tagovailoa out for the foreseeable future, it was backup quarterback Teddy Bridgewater who took over on offense for Miami. The offense looked much more sluggish under Bridgewater, and the Dolphins finished the game with just 15 points, their lowest total of the season. Now they’ll head to New Jersey for a divisional matchup against the Jets.

If the Dolphins can’t manage to get the win against the Jets with Bridgewater at the helm, they could be in major trouble, after starting the first three weeks of the season undefeated and looking like one of the best teams in the NFL. Miami will face an investigation for their treatment of Tua Tagovailoa’s injuries and approval of his return to the field, despite showing multiple “no-go” signs.

The Jets went on the road and beat the Pittsburgh Steelers on Sunday, improving to 2-2 on the season for the first time since 2017. 2nd-year quarterback Zach Wilson made his season debut, after missing the first three games of the year due to an MCL injury. Wilson struggled at first, starting the game 7 for 20 for 106 yards and 2 INTs. He would eventually get more comfortable, going 11 for 16 for 146 yards and a TD for the remainder of the game. New York has improved on both sides of the ball, and a home matchup against the Dolphins without Tua Tagovailoa offers a great opportunity for them to rise above the .500 mark to 3-2.

New York’s defense was one of the pleasant surprises in their 24-20 win over the Steelers on Sunday. Defensive captain C.J. Mosley led the way with 11 total tackles. Meanwhile, the Jets saw a bevy of good performances from their 2022 draft picks. 26th-overall pick Jermaine Johnson got his first solo sack of the season. 4th-overall pick Sauce Gardner had a great pass deflection and a few tackles. He currently ranks among the league’s best cornerbacks. 10th-overall pick Garrett Wilson reeled in 2 catches for 41 yards, and 46th-overall pick Breece Hall rushed for 66 yards and a touchdown. The Jets youth movement is starting to make a real impact.

I’m very tempted to pick the Jets this week. They have looked pretty solid in their last few games, and have the advantage of being at home. That being said, I’m just not sure if they’ll be able to lock down the dynamic duo of wide receivers, Tyreek Hill and Jaylen Waddle. Unless Teddy Bridgewater has an absolutely abysmal game, which is not out of the realm of possibility, I’d favor the talent on the Dolphins roster. Even with Tagovailoa unavailable, Miami should be able to handle things against the Jets in this one.

Fantasy Football Freebie: Jets wide receiver Corey Davis has had a quietly strong start to the season. He’s managed to bring in 15 catches for 261 yards and 2 touchdowns through four weeks. The Jets will probably need to sling the ball around a lot to keep up with the Dolphins dynamic receiving core. Miami’s defense is susceptible to deep balls, Davis’ specialty. He should have a big game here.