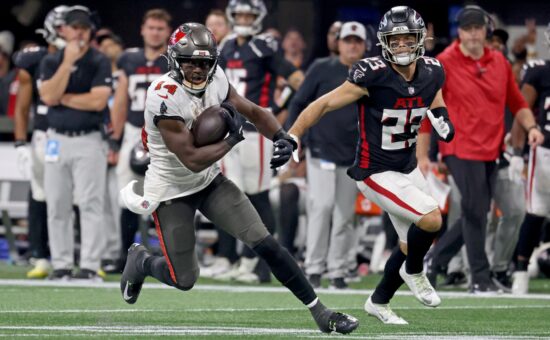 If you’re looking for the best NFL predictions for the Falcons vs Buccaneers game – look no further! – Vegas Odds has you covered.

This Week 5 game features a divisional matchup between the 2-2 Falcons and the 2-2 Buccaneers.

The Falcons improved to 2-2 on Sunday, thanks to a 23-20 win over the Cleveland Browns. Atlanta took advantage of some timely turnovers, managing to win a game in which quarterback Marcus Mariota completed just 7 passes. 2022 5th-round pick Tyler Allgeier got his first start at running back with Cordarrelle Patterson out with a knee injury. Allgeier had an impressive first start, finishing with 84 rushing yards on 10 carries and a 20 yard reception. Superstar tight end Kyle Pitts was once again very quiet in Atlanta’s win, but no Falcons receiver managed to exceed two receptions on Sunday, indicating the problem doesn’t lie with Pitts, but with Mariota.

Atlanta’s defense had a really strong game on Sunday. They were able to force two turnovers, intercepting quarterback Jacoby Brissett and stripping tight end David Njoku of the ball. The interception off of Brissett came from rookie cornerback Dee Alford, who played for the Winnipeg Blue Bombers in the Canadian Football League last season after attending Division-II Tusculum for college.

The Falcons are doing a much better job of closing out the game than they have over the past few seasons, but face a tough divisional matchup against the Buccaneers. With Brady banged up and Tampa Bay’s offense struggling, Atlanta’s defense needs to take advantage and clamp down on the Bucs to have a shot at an upset win on the road.

Buccaneers Having Some Issues

The Buccaneers had their worst performance of the year on Sunday night, losing to the Chiefs 41-31. While Tampa Bay’s offense looked the best it has all season against Kansas City’s late game prevent defense, the overall effort came up way short. What was most concerning what the Buccaneers’ inability to stop Patrick Mahomes and the Chiefs offense. Their defense ranked 1st in the league entering Week 4, and it was a crucial factor in Tampa Bay’s success. The Chiefs may be a tough team to defend, but allowing a 41-point romp at home is not a good sign for the Bucs. They really need to bounce back on defense against the Falcons this week.

Tom Brady suffered a handful of minor injuries in Sunday’s loss that have lingered into this week’s practice. While they could just be seen as management days for the 45-year-old quarterback, Brady’s practice absences may actually be a cause for concern. Despite the nagging shoulder and finger injuries, he managed to put up his best performance of the season so far against the Chiefs, finishing with 385 yards and 3 touchdowns. If Brady is able to go, he should be just fine to pick apart the Falcons defense. If not, it’ll be backup quarterback Blaine Gabbert manning the helm for the Buccaneers on Sunday.

This should be a low-scoring game with struggling offenses and injuries on both sides. It’d be hard to bet against Tom Brady at home in this one, especially with how the Falcons passing game has performed as of late. Atlanta’s leading rusher, Cordarrelle Patterson, is headed to the IR, so it’ll once again be up to the rookie Tyler Allgeier to help support the struggling Falcons offense on the ground. If Brady gets the start, as I anticipate he likely will, the Buccaneers should be able to get the win here at home.

Fantasy Football Freebie: The Buccaneers defense had by far their worst game of the season against the Chiefs. That being said, they couldn’t have asked for a better bounce back opportunity this week than a matchup against a Falcons team that completed just seven passes in Week 4. I expect Tampa Bay’s defense to enter this game hungry to rebound, holding Atlanta to fewer than 20 points.