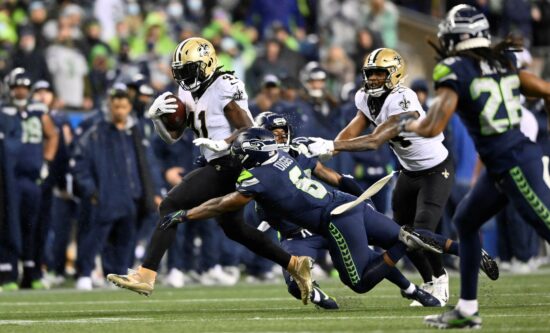 If you’re looking for the best NFL predictions for the Seahawks vs Saints game – look no further! – Vegas Odds has you covered.

This Week 5 game features a matchup between the 2-2 Seahawks and the 1-3 Saints.

The Seahawks defeated the Lions 48-45 in a remarkable offensive bout on Sunday. Quarterback Geno Smith finished the day 23 for 30 for 320 yards, 2 passing touchdowns, and a rushing touchdown. Running back Rashaad Penny also had a big day, picking up 151 rushing yards and 2 TDs on 17 carries. Wide receiver DK Metcalf reeled in 7 catches for 149 yards. Seattle’s offense looked fantastic on Sunday, but the opposition being the league-worst Lions defense makes it a bit less convincing. They’ll have an opportunity to prove how good the offense currently is with a matchup against a much better Saints defense this week.

Seattle’s defense struggled to stop the Lions high-flying offense. Despite Detroit being without starting running back DeAndre Swift and top wide receiver Amon-Ra St. Brown, the Seahawks allowed them to score again and again. Seattle was fortunate to prevail in the end, but the lackadaisical effort by the defense has created some concern moving forward.

The Seahawks currently sit in a 4-way tie in the NFC West division at 2-2. A win on Sunday could fault them into 1st place in a season where they were expected to be among the worst teams in the league. With the defense looking vulnerable, Seattle will need to avoid turning the ball over to keep up with the Saints in New Orleans.

Saints Banged Up and Struggling

Saints starting QB Jameis Winston missed Sunday’s game in London due to a back injury. Backup QB Andy Dalton played a decent game, finishing with 236 yards and a TD, but ultimately couldn’t prevail against the Vikings. New Orleans was also without starting RB Alvin Kamara, who missed his second consecutive game, and top WR Michael Thomas, who has also missed multiple games this season. With all of these injuries on offense, the Saints have found themselves at 1-3 for the first time since 2016. New Orleans managed to compete with the Vikings despite all of this, and could still complete a successful season if they can get healthy soon.

On the defensive side, the Saints are led by star cornerback Marshon Lattimore, who finished the game with 10 total tackles. New Orleans also got a timely interception from safety Tyrann Mathieu, but failed to recover two forced fumbles. After losing two fumbles of their own, the Saints were unable to mount a 4th-quarter comeback in London. They’ll return home to New Orleans for a must-win game against the Seahawks. If they fall to 1-4 on the season, their chances of making the playoffs will drop below 10%. Even if they’re not fully healthy for this game, the Saints should still be able to put some pressure on the Seahawks’ vulnerable defense.

The Seahawks are currently trending in the right direction, and are playing much better than many expected. Meanwhile, the Saints are underperforming, and heading towards the NFL’s cellar. With that being said, I actually consider these two teams to be relatively balanced. New Orleans has the advantage on defense and the benefit of playing at home. I think that’ll be enough to get them a much-needed win, but I’m not confident they’ll cover the spread with all of the injuries they’re dealing with.

Fantasy Football Freebie: Rookie first-round wide receiver Chris Olave has made the most of his opportunities gained by the growing holes in the Saints offensive roster. In the last 3 weeks, he’s hauled in 18 catches for 294 yards and a TD. Against an impuissant Seahawks secondary that allowed T.J. Hockenson to finish with 179 yards and a 2 TDs, Olave should have another big game.