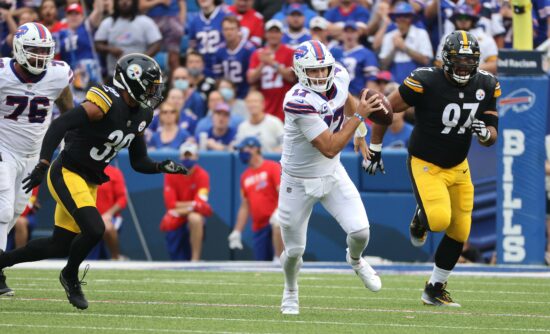 If you’re looking for the best NFL predictions for the Steelers vs Bills game – look no further! – Vegas Odds has you covered.

This Week 5 game features a matchup between the 1-3 Steelers and the 3-1 Bills.

After starting the game out 7 for 13 for 84 yards and an INT, quarterback Mitchell Trubisky was finally pulled in favor of 2022 1st-round pick Kenny Pickett. Although he threw 3 interceptions in his debut, Pickett flashed some real talent. It’s likely that the Steelers are ready to make the change for real. If that ends up being the case, his first start will come in a brutal matchup against an extremely dangerous Bills defense. Pickett wasn’t the only 2022 NFL Draft pick that had a big game for Pittsburgh. 2nd-round wide receiver George Pickens had his best game of the season so far, finishing with 6 catches for 102 yards.

Pittsburgh’s defense has become more vulnerable since losing star defensive end T.J. Watt to a pec injury. On Sunday, they allowed the Jets to score 24 points, including 14 in the 4th quarter that sealed the win for New York. Myles Jack and Minkah Fitzpatrick led the way, combining for 16 tackles, but the rest of the defense struggled to perform at the same level as usual.

The Steelers are now 1-3 and must travel to Buffalo to face a Bills team that are currently the Super Bowl favorites. Pittsburgh needs their defense to put a lot of pressure on Josh Allen, despite not having T.J. Watt to assist them. It’s uncommon for the Steelers to be such a large underdog, but a win won’t come easy in Buffalo. All eyes will be on Kenny Pickett for his first career start.

Bills are Back on Track

After a disappointing loss in Week 3 against the Dolphins, the Bills bounced back with a big road win over the Baltimore Ravens. Buffalo trailed 20-10 at halftime, but scored 13 unanswered points in the second half to get the win. The defense’s second-half shutout saved the Bills, after their second consecutive below-average offensive performance. Quarterback Josh Allen finished 19 for 36 for 213 yards and a touchdown. The Bills will face another tough AFC North defense this week and will need to produce a much better offensive performance to avoid an untimely upset, and improve to 4-1 on the season.

Buffalo got another impactful game from their newest defensive acquisition, Von Miller, who got his 3rd sack of the season in the win. That being said, the real star of the defensive front on Sunday was linebacker Matt Milano, who finished with 13 tackles and 2 tackles for loss. Milano was flying all over the field, and made a notable impact. The biggest defensive influence came from safety Jordan Poyer, who intercepted Lamar Jackson on both of the Ravens’ final two drives. He now leads the NFL with 4 interceptions through 4 games. Poyer entered the game on Sunday banged up with a foot injury, but still managed to be the star of the game.

I imagine pretty much everyone has the Bills winning this game, so let me make the argument for why they may not. Their offense has struggled against good defenses. They combined for just 42 points in the last two weeks against Miami and Baltimore. Pittsburgh’s defense is pretty tough, so an offensive dud could open the door for an upset. With that possibility discussed, in all likelihood the Bills will win this game with ease. I expect Orchard Park to be rocking for another dominant Bills win.

Fantasy Football Freebie: The Bills defense has been one of the best this season in both real and fantasy football. With a young and inexperienced Kenny Pickett likely to get his first NFL start in this game, expect the Bills defense to cause some problems for him. Pickett threw 3 interceptions in a half against the Jets defense. The Steelers are bound to turn it over quite a few times in Buffalo.