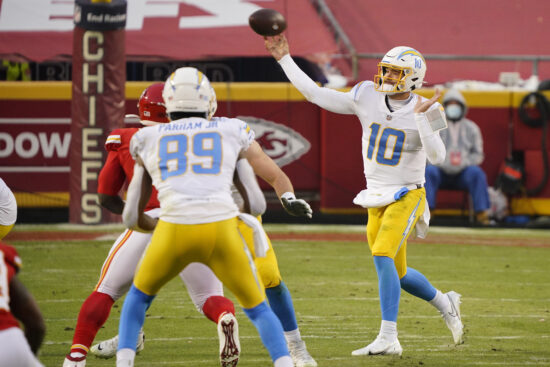 Justin Herbert was outstanding last year after the unfortunate incident with Tyrod Taylor forced him into action, and you can even argue that he looks like he’ll be an upgrade on Philip Rivers.

One of the biggest issues on the offense last season was a lack of protection, but that should improve next season after the signing of Corey Linsley, while their 1st round pick Rashawn Slater should finally solve their issues at left tackle.

They did lose a major part of their passing game as Hunter Henry joined the Patriots, but Jared Cook still looks like a solid pickup to tide them over there.

There is quality on the defense and the combination of Joey Bosa and Nwosu should provide a constant pass rush, while Kenneth Murray was one of the standouts last year at linebacker.

Unfortunately they probably don’t have enough to win the division at this point, but a winning season and a push for the playoffs shouldn’t be out of the question at all:

There are a few fixtures in this schedule where you can see the Chargers going on a run of wins, and those final three are all winnable at the most important time of the year.

Time will tell if they’re still in contention at that point, but it’s set up for an exciting run-in if they are