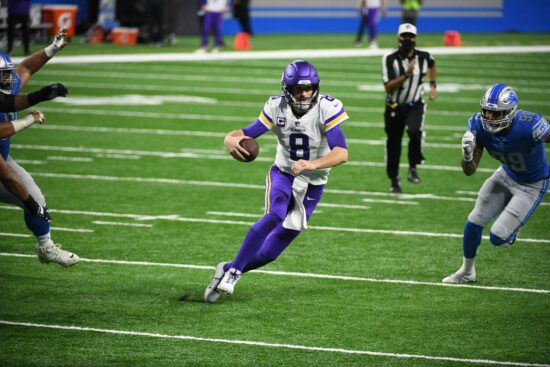 It was a disappointing season for the Vikings last year as the struggled on both sides of the ball, but there’s every reason to think they will bounce back.

The selection of Christian Darrisaw in the 1st round of the Draft should give them more solidity on the O-line, while the WR pairing of Justin Jefferson and Adam Thielen is up there with the best in the league.

There could be an underrated QB competition as the selection of Kellen Mond will put some pressure on Kirk Cousins, but there’s nothing to suggest the rookie is pushing for a starting to role to begin the season.

There are a couple of solid looking pick-ups in free agency with the additions of Dalvin Tomlinson and and Patrick Peterson to the defense so improvements will be expected on both sides of the ball, and a play off push should be their minimum aim:

If the Vikings can start at least 1-1 then they have a solid run of home games to build momentum before the bye so anything could be possible there.

It’s a tougher end to the season as Chicago may have a more comfortable Justin Fields playing with a point to prove at that point.