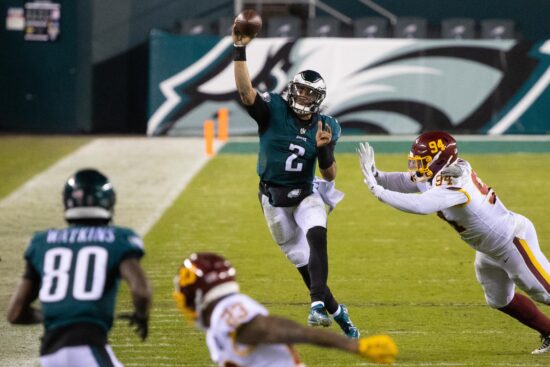 The Jalen Hurts era is officially underway in Philadelphia, but time will tell if they can still challenge this season or if they’re going to go through a transition period.

They did go through plenty of receivers and injuries last season so that didn’t help the offense, but their success will likely come down to the performances of a couple of first round picks.

Jalen Reagor didn’t impress too much in his rookie season but he’ll be expected to make the step up, while the addition of DeVonta Smith could blow the offense wide open.

They’ve also got Travis Fulgham who was better than expected last year and perhaps J.J Arcega-Whiteside will finally step up.

The O-line could be great if they can all stay fit and Landon Dickerson is a highly regarded pick who’s had injury issues, so this could be a fun offense to watch if they can get the running game going too.

Defensively they could have a few problems as they’re strong up front but there are question marks about those who will be expected to cover, so the offense will need to be firing.

They won’t be the favourites for the division and it will depend on how good Hurts can be, but there’s potential here for a good year and a playoff push:

There are pockets of games in this schedule where they can go on a run of wins, but it’s going to be a lot of fun to watch those final three division games if they’re still in playoff contention at that point.