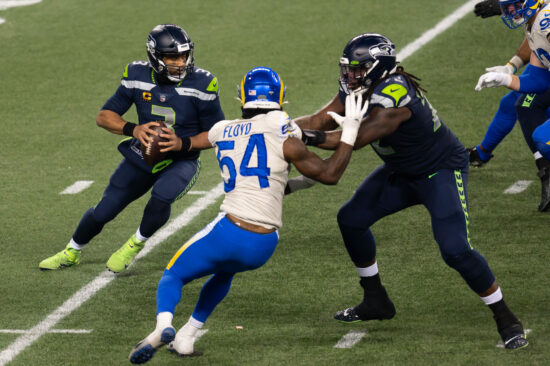 The rumours have been getting louder over a supposed unhappiness with Russell Wilson and Seattle, and it’s starting to become clear why.

They are a team who like to make trades for big-name players instead of keeping hold of those picks, but they were only able to select three times in the Draft this year and that is a worry.

They did manage to keep Chris Carson around while the additions of Gerald Everett and D’Wayne Eskridge offer him more in the passing game, but the worry always comes back to that O-Line.

They’ve done little to improve it during the offseason and Wilson is often having to scramble for his life, so it’s a risky game to play.

One bad hit puts Geno Smith into the starting role and effectively ends their season, while the defense has also lost some key starters without bringing in notable replacements.

It’s not all doom-and-gloom, they do have several outstanding players who can take over a game on their own, but there may be too much reliance placed on the likes of Wilson, Metcalf and Wagner staying fit and being in top form for the entire season.

Every other team in this division has improved, so it won’t be a surprise if Seattle don’t make the playoffs this time round:

There’s a good chance to get on a roll to start the year and in the final fixtures if the post-season is likely, so that should allow them to build momentum at vital times.

The double-header with the Rams and 49ers in weeks 4 and 5 will be massive, and a couple of wins there would set them up nicely for the rest of the campaign.